Business
Cars
COVID-19
Entertainment
Family
Fashion
HomeNewsEducation debates are rife with references to war – but have they...
News

Education debates are rife with references to war – but have they gone too far? 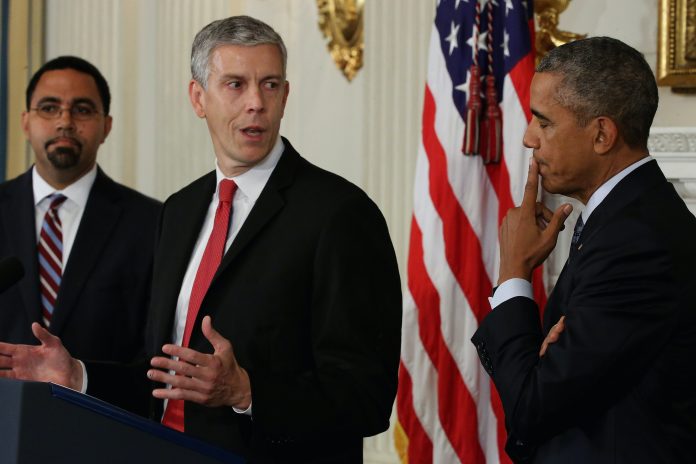 As President Joe Biden oversaw the transfer of the remains of the U.S. soldiers killed in a suicide bomb attack at Afghanistan’s Kabul airport on Aug. 26, 2021, former Education Secretary Arne Duncan took to Twitter. Appearing to weigh in on the controversy over mask mandates in public schools, Duncan compared “anti-mask and anti-vax people” with “the suicide bombers at Kabul’s airport.”

“Have you noticed how strikingly similar both the mindsets and actions are between the suicide bombers at Kabul’s airport, and the anti-mask and anti-vax people here?” Duncan wrote in a since-deleted tweet. “They both blow themselves up, inflict harm on those around them, and are convinced they are fighting for freedom.”

Duncan’s tweet drew a deluge of negative reactions. Some insulted the former secretary, some criticized his timing and judgment, and others offered sarcastic advice. They criticized him for politicizing a tragic event. But Duncan’s use of a war metaphor to make a point is, in this instance, notable for reasons that go beyond the fact that it drew a sharp rebuke.

As a scholar who studies the rhetoric of education policy, I know that war analogies are a long-standing and common feature of public discourse about U.S. education.

For instance, in 1955, author Rudolf Flesch began his bestseller, “Why Johnny Can’t Read,” by declaring that “just as war is ‘too serious a matter to be left to the generals,’ so, I think, the teaching of reading is too important to be left to the educators.”

Similarly, a influential 1983 federal report, “A Nation at Risk,” stated that if “an unfriendly foreign power had attempted to impose on America the mediocre educational performance that exists today, we might well have viewed it as an act of war.”

In both cases, the authors used war analogies to emphasize the urgency of education reform.

Beyond these prominent examples, the everyday language of education is rife with war metaphors. Classroom teachers work on the “front lines” of various aspects of education. School officials frequently find themselves “embattled.” Teachers unions “go to war” with school district superintendents. Even public education itself is said to be “under siege.”

In his remarks on the reopening of the nation’s schools this fall, Secretary of Education Miguel Cardona stressed the importance of “winning the fight against the pandemic.” In these cases, comparing some aspect of education to an aspect of war aids with clarity and meaning.

The modern federal role in education is itself an extension of a different kind of war. When the Soviet Union launched Sputnik – the first artificial satellite – into space in 1957, it triggered the so-called “Sputnik Crisis,” or a panic that America’s education system was failing to produce enough scientists and engineers.

The crisis focused the country on its schools and resulted in the passage of the National Defense Education Act of 1958, which invested large sums of federal dollars into education for the first time.

So, if war metaphors are common in the rhetoric of education policy, what is different about Duncan’s tweet?

For starters, it does not liken education to war in the abstract. Rather, it picks out specific individuals and events for comparison. Using war as an analogy for public policy such as in the war on drugs or the war on terror can help pass legislation. However, as communication scholar David Zarefsky demonstrated in his study of the rhetoric of the War on Poverty, such metaphors can distort the implementation of those same laws as the people they aim to help get recast as enemies when their problems prove difficult to solve.

Also, while abstract comparisons to war are open to interpretation, Duncan’s comment brings to mind specific actors who killed or were slain in war, a clearly unpleasant subject.

Additionally, while some war metaphors use hyperbole, they do not usually have the punchline format of Duncan’s tweet. Although it does not seem that Duncan was trying to be humorous, beginning the tweet with “have you noticed” – the classic setup for observational humor – is an awkward way to frame a tweet about a recent suicide bombing.

Finally, war metaphors in education, especially when they are made by former or current public officials, usually make a unifying appeal. In Baltimore in August 2021, Secretary Cardona called the nation together to reopen its schools. “A Nation at Risk,” even though its rhetoric was bombastic, asked Americans to see the struggles of the nation’s education system as a collective responsibility that should inspire a collective response.

By contrast, Duncan’s tweet was divisive. It characterized people who opposed masks and vaccines as enemies on par with ISIS, rather than fellow Americans who might be persuaded to change their minds.

As I have written elsewhere, secretaries of education have a responsibility to help lead the public discourse on education in the United States. Improving the national discussion on schools was one reason President Jimmy Carter gave for founding the Department of Education and elevating its secretary to a cabinet role.

Although Duncan is a former secretary, he continues to seek to influence education policy as a prominent educator and an education nonprofit board member. For those reasons, his responsibility as a rhetorical leader in the field of education continues as well.

[Insight, in your inbox each day. You can get it with The Conversation’s email newsletter.]