What’s on the agenda when Ukraine president meets Biden? 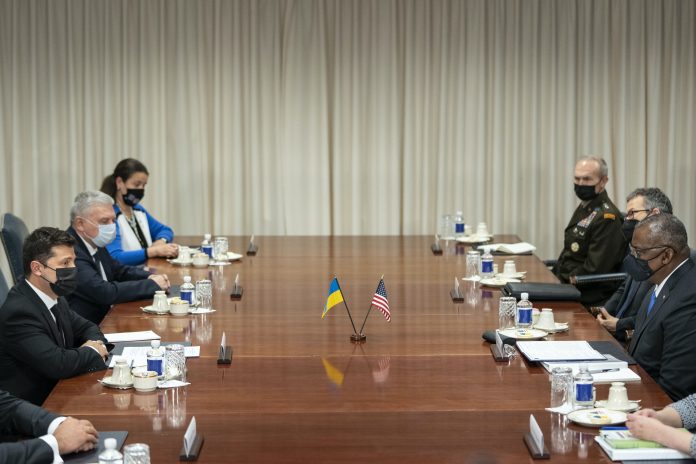 A long-awaited – and previously postponed – White House meeting for Ukraine’s President Volodymyr Zelenskyy is due to take place Sept. 1, 2021.

The sitdown with President Joe Biden is being viewed in Ukraine as hugely important, both symbolically and practically. Zelenskyy is expected to seek a strong commitment from the U.S., pledging support for Ukraine in its conflict with Russia. Meanwhile, the Ukrainian president will also be lobbying Biden over the Nord Stream 2 Pipeline – a Russia-to-Germany gas pipeline that will circumvent Ukraine, starving Kyiv of annual gas revenue that could run into the billions of dollars.

Lena Surzhko Harned, an expert in post-Soviet Ukraine at Penn State University, walked The Conversation through the issues.

Ukraine says its security and territorial integrity have repeatedly been threatened by Russia since 2014.

In February of that year, Russia annexed Crimea, a peninsula on the Black Sea. Later a war broke out between the Ukrainian military and so-called pro-Russia separatists in the Donbas region in the east of the country. Despite no longer receiving the same level of international attention as it did in the early months of conflict, the war continues to generate casualties.

Ukraine maintains that Russia is directly involved in the fighting in Donbas – a charge the Putin government has repeatedly denied, to general skepticism by others in the international community.

Zelenskyy was elected in 2019 on an electoral promise to end the war and return Crimea to Ukraine. He appears to have settled on a strategy of building up the support of the international community while asserting the country’s right to self-defense, via military buildup in Ukraine.

As part of Zelenskyy’s international diplomatic push, last week he launched the Crimean Platform initiative. A first meeting for the initiative on Aug. 23, 2021, attracted government representatives from 46 countries, including the U.S. The attending countries issued a joint resolution calling for the “return” of Crimea to Ukraine. This echoes the view of the Biden administration, which has in the past affirmed its commitment to Ukraine’s territorial integrity by recognizing that “Crimea is Ukraine.”

Meanwhile, evidence of a more assertive self-defense stance by Ukraine can be seen in the past week’s celebration of Ukraine’s 30th Independence Day, during which Zelenskyy’s administration put on a full parade, including naval and air force displays, celebrating Ukrainian military achievement.

The flexing of diplomatic and military muscles has not been taken lightly in Russia, which reacted to the Crimean Platform by portraying it as a threat to Russian sovereignty.

Trouble in the pipeline

The meeting between Zelenskyy and Biden also comes amid growing concern in Ukraine over the Nord Stream 2 pipeline, which is being viewed in Ukraine as a geopolitical weapon in Russia’s hands.

The gas pipeline from Russia to Europe could mean revenue loss to Ukraine of up to US$3 billion a year in gas transit fees.

Moreover, there are fears in the capital, Kyiv, that once Russia is no longer dependent on Ukraine for its transit infrastructure – which it needs to transport gas to the lucrative European Union market – Russia might be able to move more aggressively in full military action in Ukraine. The buildup of Russian military around Ukrainian borders in April 2021 reminded Ukraine of Russia’s threatening military presence.

The pipeline is near completion and has been a source of intense international conversation, with Germany and Russia arguing that the pipeline is an economic project, not a political one, as it is portrayed by Ukraine and others.

Germany has committed to guarantee that Ukraine will have some compensation for any losses related to the pipeline in the form of investments. Outgoing leader Angela Merkel has said that Germany will use sanctions and other economic mechanisms available should Russia attempt to use gas as a weapon against Ukraine or Europe. But given that such commitments are coming from a leader who will soon be leaving office, Ukraine remains skeptical.

What Ukraine wants from the US

Against this background, President Zelenskyy is likely to seek firm assurances from Biden that the U.S. will treat Ukraine as an equal partner when it comes to questions of security and peace in the region.

This will include military assistance – $60 million of which was pledged by the U.S. to Ukraine ahead of the Sept. 1 meeting.

Zelenskyy will also be looking for progress – and support – from the U.S. on the issue of Ukraine’s ambitions to join NATO. Biden has previously indicated that Ukraine still has work to do in tackling corruption before it can get the go-ahead to join the military alliance. Zelenskyy is likely to highlight his administration’s anti-corruption reforms in order to make progress on this.

A more immediate concern for Zelenskyy may be persuading Biden to announce fresh sanctions over the Nord Stream 2 pipeline. The Biden administration lifted earlier sanctions related to the pipeline in May, a move that disappointed Ukraine and was attacked by Republicans in the U.S..