America’s Muslims come from many traditions and cultures 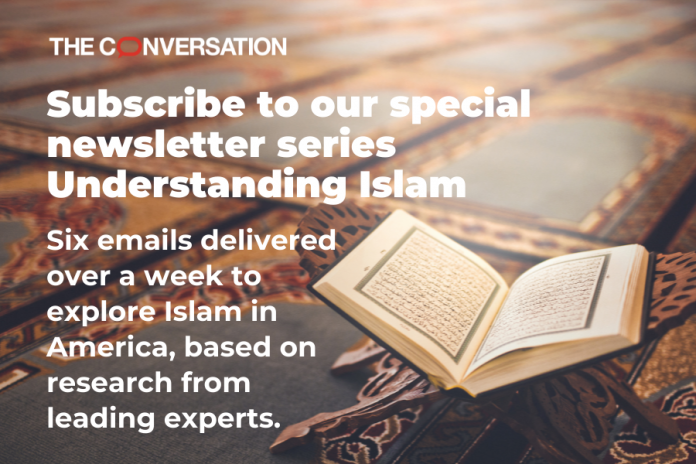 In the last installment of this series, you learned about some of the basic tenets of Islam that your neighbors, friends or colleagues may be practicing. In this newsletter, we will cover some of the different Muslim sects and the interesting ways they mix in the United States.

Journalists and scholars have pointed out how Muslims in the U.S. are often cast simplistically either as good or bad: The good ones are raising their voices against terrorism and the bad ones are violent, or likely to be.

This view blocks out an “otherwise fascinating spectrum” of American Muslims, writes scholar Abbas Barzegar. “Outside of Mecca itself,” he says, “there exists no other Muslim population that displays the theological, ideological, class and ethnic diversity as that which resides here” in the U.S.

So, what are the different ways of being a Muslim?

Many American Muslims belong to one of the two main sects in Islam – Sunni and Shiite. Each draws its faith and practice from the Quran and the life of the Prophet Muhammad. The two agree on most of the fundamentals of Islam.

But the two groups split after the death of Prophet Muhammad in A.D. 632, when issues over leadership emerged, writes religion scholar Ken Chitwood. The majority of the Muslim community sided with Abu Bakr, one of the prophet’s closest companions. A minority, however, opted for the prophet’s cousin – Ali.

Muslims who rallied around Abu Bakr came to be called Sunni – meaning those who follow the Sunna, or sayings, deeds and traditions of the Prophet Muhammad.

Those who trusted in Ali came to be known as Shiite. The name comes from a contraction of “Shiat Ali,” meaning “partisans of Ali.” There are three main branches of Shiite Muslims: Zaydi, Twelver and Ismaili. Other Shiite-associated sects or movements include the Alawi in Syria, Hezbollah in Lebanon and the Houthi in Yemen.

Among Sunni Muslims there are four principal schools: Shafi’i, Hanbali, Maliki and Hanafi. There are also Sunni-associated religious reform movements like the Salafis and Wahhabis and political organizations like the Muslim Brotherhood.

Other than these sects, the Islamic tradition has other ways of approaching the divine.

Sufis believe in a more “inward, contemplative focus than many other forms of Islamic practice,” explains scholar Peter Gottschalk. The 13th-century Persian poet and Sufi leader Jalāl ad-Dīn Muhammad Rūmī communicated the yearning for a heartfelt relationship with God and believed contemplation was the way to achieve it.

Gottschalk explains that many Muslims and non-Muslims around the globe celebrate Sufi saints and gather together for worship in their shrines. Many Sufi saints are believed to be “friends of God” and have the power to perform miracles. The graves of these saints often become pilgrimage sites. However, militant groups, such as the Islamic State Group, do not embrace the traditions, and Sufi shrines have often been attacked in such countries as Afghanistan and Pakistan.

Another sect, the Ahmadiyya, was founded in the Punjab region of India by a Muslim religious leader, Mirza Ghulam Ahmad, in 1889. Ahmadis believe Mirza Ghulam Ahmad was the promised Messiah of Islam. However, because of disagreements over who counts as a prophet in Islam, Ahmadis often face persecution from other Muslims. They have been declared heretics, or non-Muslim, in multiple countries. In Pakistan, the country with the largest number of Ahmadis, they represent about 0.2% of the population of 208 million. Because they are targeted for their beliefs, many Ahmadis come to the United Kingdom, Canada, or the U.S. to escape violence in their countries of origin.

All these global religious traditions are present in the U.S. As Barzegar points out, small mosques in the United States may bring together different ethnic communities such as Bosnians, Turks, Bangladeshis and so on. Other large and diverse congregations may include both immigrants and Black Muslims.

Among these mosques is one in Harlem that was founded in 1964 by Malcolm X when he left the Nation of Islam. Bargezar writes that the current spiritual leader of the mosque, Imam Talib Abdur Rashid, “champions” the fight against “institutional discrimination and structural inequality” as he joins hands with other “oppressed groups.”

American Muslims today are part of many traditions, beliefs and culture. In addition, they are developing new interpretations of Islamic law. For example, says Bargezar, an emerging number “lovingly accept queer and gay Muslims” and “allow for unconventional practices of women’s religious leadership.” And a younger generation of Muslims are less likely to be affiliated with mosques. Instead, “you will find them in Silicon Valley, Syrian refugee camps and at the same time on Snapchat,” he adds.

This article was reviewed for accuracy by Ken Chitwood, a Postdoctoral Research Fellow at the Berlin Graduate School of Muslim Cultures & Societies at Freie Universität Berlin. He is also a journalist-fellow at the University of Southern California’s Center for Religion and Civic Culture.

Fact: An eighth-century female Sufi saint, known popularly as Rabia al-Adawiyya, is said to have walked through her hometown of Basra, in modern-day Iraq, with a lit torch in one hand and a bucket of water in another. When asked why, she replied that she hoped to burn down heaven and douse hell’s fire so people would – without concern for reward or punishment – love God. – From an article written by Peter Gottschalk, Professor of Religion, Wesleyan University

In the next issue: Islam’s contributions to the world