Lesson from a robot swarm: Change group behavior by talking one-on-one rather than getting on a soapbox 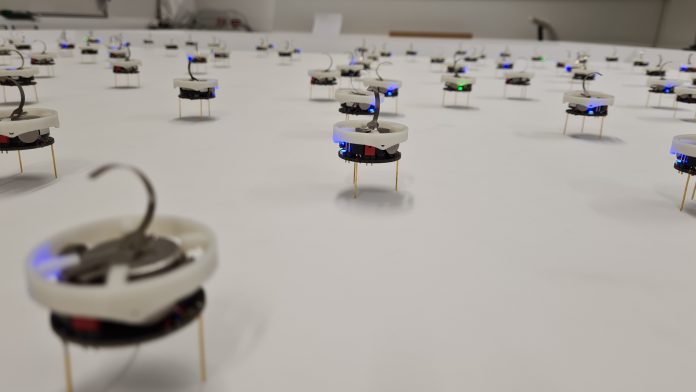 You find a new restaurant with terrific food, but when you suggest meeting there in a group text to your friends, the choice to meet at the same old place carries the day.

Next time, you should consider persuading your friends one by one, rather than reaching out to the group as a whole.

Research conducted by my colleagues and me using swarms of robots suggests that this less-is-more strategy of distributing information over time can increase the probability of getting a group to choose the best option. Our results could make it easier to develop microscopic robots that work inside the body, and could have implications for how information spreads on social media.

Our robot swarm study looked at how opinions spread in large populations. We found that a population of uninformed individuals can cling to outdated beliefs and fail to adopt better available alternatives when information about the new options spreads to everyone all at once. Instead, when individuals only share the information one by one, the population can better adapt to changes and reach an agreement in favor of the best option.

In our study, published in July 2021 in the journal Science Robotics, we set up a swarm of autonomous robots that make collective decisions on the best available alternatives and operate in an environment that changes over time. We found that less was more: robot swarms with reduced social connections – meaning the number of other robots they can communicate with – adapted more effectively than globally connected swarms. This runs counter to the common belief in network science that more connections always lead to more effective information exchange. We show that there are situations when the opposite occurs.

Each Kilobot is less than an inch and a half (3.8 cm) in diameter and height, and communicates by infrared light. We programmed 50 of the robots with very simple behaviors: random movements to explore the environment and basic voting rules to exchange opinions. The robot swarm scans an unknown environment and collectively selects the best site; for example, the site best suited for building a structure. Each robot develops its own opinion from its scans of the environment and regularly checks the opinion of a single random neighbor. If a robot receives a conflicting opinion, it resets its own opinion by polling other robots. This allows the swarm to reach consensus without getting deadlocked.

The simplicity of the individual behavior isn’t merely a matter of convenience in our study. It’s key to building robot swarms of the future. These include swarms with very small robots like microscopic robots that operate in the body, robots with simple components like biodegradable robots for cleaning the ocean, and low-budget, single-use robots like those that could be damaged or destroyed in disaster sites. Robot swarms with minimal behaviors can also be a viable option for robots that operate without human supervision in otherwise inaccessible locations.

To write the algorithms that control our robots, we built mathematical models that explain the spreading of opinions in populations of socially connected, uninformed individuals. This process is similar to collective decision-making in other settings, including animals and humans.

Specifically, our algorithm is inspired by the behavior of European honeybees when they collectively select the site to build their future nest. Bees interact locally with one another and exchange voting messages by vibrations. The bee colony makes decisions without any central authority.

Similar collective decisions can be observed in schools of fish, who seem to know the less-is-more rule. In fact, recent research has shown that schooling fish reduce their social network — the number of fish they pay attention to — when they need to quickly absorb new information such as the source of a perceived threat.

Despite finding the less-is-more rule in nature, we did not expect to find it in our study of robot swarms. We were testing hundreds of robots running a model based on observations of the collective behavior of honeybees selecting a nest site. This model allows the swarm to make decisions that take into account the value of the option based on how much good news it’s receiving, whether it’s indicators of a good nest-building site or positive restaurant reviews. This means the swarm not only considers the relative quality of the alternatives but also their absolute quality, meaning whether any of the alternatives is good enough.

This corresponds to what organisms — including humans — typically do. For example, when picking where to eat, if all open restaurants serve meals below your standard for quality, you won’t care that one restaurant is 5% better than the others; you won’t eat out today. But if a couple of restaurants are very good, picking either of the two will be satisfying even if there is a 5% difference in quality between them.

When we implemented this in the robot swarm, we expected that the more the individuals were socially connected, the better the swarm would adapt to environmental changes. This is what is predicted and observed in most models of networked individuals. But we found the opposite: The less connected the group was, the better our robot swarm responded to a change.

We then built a mathematical model that described the system and explained the observed phenomenon. Environmental changes are discovered by a small group. In a globally connected network, the small group faces an almost impossible task in trying to overturn the established opinion of the majority, even if the environmental changes present a better alternative. Instead, when individuals interact sporadically and in small numbers, an opinionated minority can easily gain traction and change the opinion of the entire group in cases where the group opinion isn’t as strongly held as the minority’s opinion.

The less-is-more effect doesn’t hold up in all cases. We observed this phenomenon in networks where the individuals follow simple rules and changing the opinion of others is not instantaneous but requires some time. Humans, in certain contexts, have simple reactive behavior that doesn’t involve much thinking, and may therefore be subject to similar dynamics.

People are globally connected through social media, which influences the spread of opinions in large populations. Understanding how opinions change — and don’t — is crucial for facing the challenges of the digital age.