Warrior, servant, mother, unifier – the Virgin Mary has played many roles through the centuries 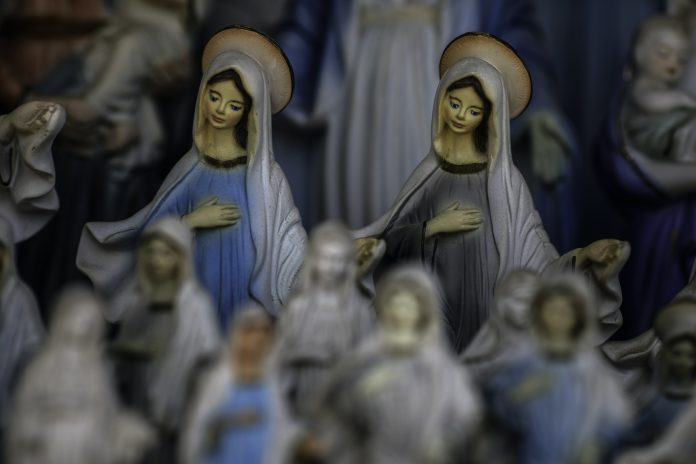 In a recent article in the Jesuit magazine “America,” author Whitney Bauck pointed out that the Virgin Mary has become “an icon for pop stars and social justice warriors.”

Visitors to the website of designer Brenda Equihua, for example, will find outerwear with a colorful image of Mary displayed on the back. These coats feature prominently in the closets of numerous celebrities. The Puerto Rican singer Bad Bunny wears one in his “Cuidao por Ahí” music video,“ and rappers Lil Nas X and Shelley FKA DRAM, among others, have likewise been spotted wearing theirs in various settings. Equihua keeps a full list of such appearances on her website.

While Mary may be enjoying renewed popularity as of late, this is not the first time she has been “in the spotlight.” In fact, because of the enormous and consistent impact that she has had on both Christians and some non-Christians for nearly 2,000 years, it’s difficult to conceive of a time in which Mary wasn’t a prominent figure.

As a scholar of early Christian literature who has done extensive research on traditions about Mary, I argue that the early interest in Mary came from her role as mother of Jesus, and that ancient authors transformed her into a sort of mythological figure by putting special emphasis on her virginity.

But others also came to emphasize Mary as an important character in her own right. For nearly 2,000 years, different Christian groups have understood Mary in various ways: as a servant, a warrior, an advocate, a leader, an exemplar, or as some combination of these.

She is a minor character in Matthew, and never speaks, even at the time of Jesus’ birth. She has a slightly more pronounced role in Luke, which is the only other New Testament Gospel that mentions the birth of Jesus. In Luke, she talks with an angel, visits a family member and speaks words of prophecy. She also visits Jerusalem on two occasions: once for a purification ritual in the temple, and a second time to celebrate Passover.

In Mark, she seeks out Jesus while he is preaching, and she is also mentioned in passing by people in Jesus’ hometown. The first of these scenes also appears in Matthew and Luke.

Finally, she appears twice in the Gospel of John. The first is at a wedding where the wine has run out, and the second is at Jesus’ crucifixion, where she stands nearby while he dies.

Apart from one fleeting reference to her in the Book of Acts, Mary appears nowhere else in the New Testament.

Because Jesus is the chief focus of the New Testament Gospels, it is not surprising that they contain so few biographical details about Mary. She is present as a supporting character because she was integral to how these ancient authors thought about her son. The fact that Jesus has a mother, for example, reminds readers that Jesus was, at a basic level, a human being.

The Gospel authors also use Mary to stress that Jesus was a particularly noteworthy person.

Matthew and Luke accomplish this by “mythologizing” the story of his birth, by emphasizing that Mary was a virgin when he was conceived, and that her pregnancy was of divine origin rather than the result of human sexual activity.

The theme of the virgin mother impregnated by a god is not uncommon in the ancient world, and early readers of Matthew and Luke would have understood Mary’s pregnancy in the context of other well-known stories of “divine children” born to virgin mothers.

The Roman poet Ovid, for example, writes that the mythical hero Perseus was born from a divine-human relationship between the god Zeus and Perseus’ mother Danaë. The Greek historian Plutarch makes a similar claim about Romulus and Remus, the legendary twins whose virgin mother Rhea Silvia insisted that her pregnancy was the result of divine intercourse with Ares, the god of war.

Because Matthew and Luke use Mary’s purported virginity in order to make claims about what they see as the importance of her offspring, this detail is only important for them until Jesus is born. Matthew, for example, alludes to the consummation of Mary and Joseph’s marriage after Jesus’ birth when he writes that “[Joseph] had no marital relations with [Mary] until she had borne a son.”

By contrast, some later, Christian authors highlight Mary’s virginity as something that defines her even after Jesus’ birth. In the late-second century, for example, an anonymous Christian author wrote an influential collection of stories about Mary’s birth and early life. This text is known to scholars today as the “Proto-Gospel of James,” and in it, Mary remains a virgin even after Jesus is born.

The Proto-Gospel is important for how scholars understand Mary for a number of reasons. Not least of those is that it evidences an early fascination with Mary not only as the mother of Jesus, but as an important character in her own right. Jesus is a character in this text, but he is a relatively minor one, appearing only toward the end. The author’s primary focus is the life of the Virgin.

On one level, this plays out clearly in artistic representations of Mary. In the Basilica of Saint Mary Major in Rome, for example, fifth-century mosaics portray Mary as a noble woman dressed in Roman imperial clothing, which reflects the historical context in which these mosaics were made.

On the other side of the world, in Mexico City, is the famous 16th-century icon of Mary known as Our Lady of Guadalupe. According to legend, Mary appeared in 1531 to an Aztec man named Juan Diego, and she left this image of her imprinted on his cloak. Visitors to Our Lady of Guadalupe will note Mary’s darker complexion, which is indicative of the icon’s Spanish-Mexican context. Historically, it has been a powerful and unifying symbol of Mexican identity.

A more recent example is the artist Ben Wildflower and his popular woodcut of Mary, in which she clenches her raised fist and stomps on a serpent while surrounded by the words “Fill the hungry. Lift the lowly. Cast down the mighty. Send the rich away.” When asked about Mary’s presence in his art, Wildflower commented: “Mary is who I want to be in the world.”

This phenomenon is at work also in the values that are imposed on Mary, and which sometimes seem at odds with one another. Mary has been upheld both as an exemplar for motherhood, for example, but also as a model for a more strictly ascetic, virginal life.

Her temperament is another detail that frequently shifts according to context. Mary is hailed by some Catholics as “Queen of Peace” and is frequently upheld as a paragon of free submission to the divine will. Yet, there are also medieval manuscript illustrations that show her in a more active and perhaps even violent role, punching and wrestling with demons.

Drawing from this image of the seemingly “violent” virgin, some online retailers have begun to sell merchandise featuring the slogan “Hail Mary, full of grace, punch the devil in the face.”

As Christians and non-Christians encounter Mary in various media and settings, they may do well to recall the myriad ways that she has been used to unite and comfort, but also to divide and convict. As I see it, she will no doubt continue to fascinate in both new and familiar ways for years to come.