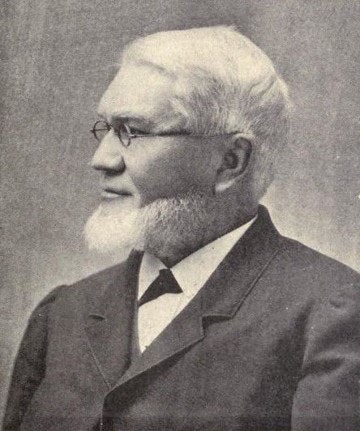 On the evening of Sept. 5, 1883, people in Honolulu witnessed a spectacular sunset followed by a period of extended twilight described as a “singular lurid after sunset glow.” There were no signs of anything else out of the ordinary, but these exceptional twilight glows returned each morning and evening over the following weeks.

Among the mystified Honolulu citizens was 56-year-old Rev. Sereno Edwards Bishop, who in his varied career in Hawaii had been a chaplain, school principal and surveyor, and who had a keen interest in science. Over the subsequent weeks and months, the exceptional twilight glows occurred around the whole globe. Remarkably, as scientists first grappled with understanding the origin of the twilight glows, Bishop’s efforts would lead to the first convincing explanation.

His discoveries led to scientific investigations of the winds high above the ground and ultimately yielded information that today is used to forecast weather over extended periods.

I am a meteorologist in Hawaii who helped revive appreciation of Bishop’s seminal contribution to the scientific exploration of the upper atmosphere.

A volcanic eruption half a world away

Today we know that the 1883 glows were caused by the sun below the visible horizon illuminating a mist of small liquid droplets in the atmosphere high above the ground.

The mist was made of sulfuric acid droplets that were formed by reactions of the massive amounts of sulfur dioxide gas produced by the explosive eruption of Mount Krakatoa close to the equator in Indonesia on Aug. 27, 1883. The eruption sent the droplets high into the atmosphere, where the winds transported them around the world. They spread gradually, and it was November before people in London began to notice the glow.

Much later, scientists observed similar effects after the June 1991 eruption of Mount Pinatubo in the Philippines. The material Pinatubo injected into the upper atmosphere could be followed in detail with satellite observations, and their connection with spectacular sunsets and twilight glows was clearly established.

In 1883, Bishop had no idea that there had been a volcanic eruption until the San Francisco newspapers arrived. Very quickly, he formulated a hypothesis that he published as a letter in his local newspaper.

“I am disposed to conjecture that some very light element among the vapors of the Java eruptions has continued at a very great height in the atmosphere, and has been borne … across the Pacific into this region,” Bishop wrote.

He realized that he could connect the eruption to the glowing skies most credibly by gathering reports of the first appearance of the glows elsewhere and tracking the initial spread of the “vapor” from Krakatoa. Bishop continued his letter: “I earnestly invite, in behalf of science, all shipmasters and mates to publish what they may have observed at sea.”

Bishop assembled a dozen such reports over the first three weeks after the eruption and was able to show that the “vapor” that produced the glows had moved westward from Krakatoa, along the equator to reach Honolulu 10 days later. This implied that there was a wind high in the atmosphere blowing steadily with an extreme speed that, at ground level, is seen only in hurricanes.

Bishop published his observations in The Hawaiian Monthly, concluding that there was “a vast stream of smoke due west with great precision along a narrow equatorial belt with an enormous velocity, around the globe.”

Bishop called the motion of the volcanic aerosol a “smoke stream.” In fact, the equatorial winds transporting the aerosol were the first discovery of what meteorologists now call a jet stream.

A half-century would pass before the experiences of pilots flying at heights of several miles revealed the existence of the extratropical jet streams lower down in the atmosphere that are now familiar from TV newscasts. Jet streams are strong, typically narrow bands of wind. The more familiar lower atmospheric jet streams move weather systems in the middle latitudes from west to east. By contrast, Bishop’s jet stream circles the equator at high altitudes and actually can blow from east to west.

Bishop’s work opened further exploration of the equatorial jet stream that culminated in the 1961 discovery that the equatorial jet stream varied from strong east winds to strong west winds roughly every other year. This so-called Quasi-biennial Oscillation has been shown to connect with weather near the ground, particularly in Europe and the North Atlantic, a fact that is now routinely exploited in making long range forecasts for the weather.

Bishop’s contribution was acknowledged by the scientists who first followed him, and he won a prize from New York’s Warner Observatory in a contest for essays explaining the post-Krakatoa glows. Bishop even merited a brief obituary in an American meteorological science journal.

Bishop, who was the son of missionaries, could also be a divisive figure in Hawaii. He supported the U.S. annexation of the islands, and his religious views opposed some native Hawai’ian traditions, such as the hula dance. His contributions to science were largely forgotten in the 20th century.

An international scientific committee’s celebration of the 60th anniversary of the Quasi-biennial Oscillation discovery is an opportunity to remember Bishop and his discovery.