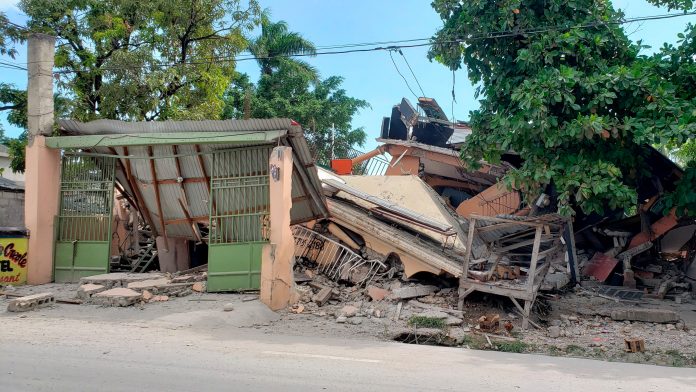 The earthquake came as tropical Tropical Storm Grace raced toward the island, potentially complicating rescue efforts. The storm is expected to arrive late Monday night or early Tuesday morning, according to the National Hurricane Center.

The death toll stood at 304, according to Jerry Chandler, Haiti’s director of civil protection. .  Teams will be sent to the area for search and rescue missions, Chandler told the Associated Press.

Makenson Pierre, 32, found one person dead near the rubble on the main street of Jérémie, his hometown. Jérémie, a coastal city in southwestern Haiti, is about 80 miles from Saint-Louis du Sud, which is located close to the epicenter of the quake.

Pierre quickly recognized the man as his childhood friend.

“He was a great guy,” Pierre told USA TODAY. “We grew up together. It was painful to watch.”

Pierre described an “overwhelmed, understaffed” hospital that had set up a tent outside to increase capacity and was handing out gloves to anyone who was willing to help. He said he saw about 15 people being treated for injuries outside.

The quake has sparked comparisons to the devastating 2010 earthquake in Haiti that killed an estimated 300,000 people.

“High casualties are probable and the disaster is likely widespread,” the U.S. Geological Survey said of Saturday’s quake. “Past events with this alert level have required a national or international level response.”

“The damage should not be as bad as 2010, b/c that quake gave Intensity VII shaking to Port au Prince,” tweeted seismologist Lucy Jones. But intense shaking from the latest earthquake affected about 130,000 people “so losses will be high,” she warned.

Haiti’s new prime minister, Ariel Henry, said on Twitter he would mobilize all available government resources following the “violent quake” that had caused loss of life and damage in various parts of the country.

Preliminary reports for the U.S. Geological Survey estimate hundreds of millions of dollars in damage. USGS reported much of the region has “structures that are vulnerable to earthquake shaking.”

Henry declared a one-month state of emergency for the country. Some towns were almost completely razed, he said at a news conference.

He added the government sent people to Les Cayes, a coastal town where local hospitals are overwhelmed with wounded people, to help coordinate a response. Haiti’s overburdened hospitals were already under the strain of the worsening COVID-19 pandemic.

“The most important thing is to recover as many survivors as possible under the rubble,” he said.

“The needs are enormous,” he added. “We must take care of the injured and fractured, but also provide food, aid, temporary shelter and psychological support.”

President Joe Biden authorized an immediate response after he and Vice President Kamala Harris were briefed about the earthquake Saturday morning, according to the White House.

“In what is already a challenging time for the people of Haiti, I am saddened by the devastating earthquake that occurred in Saint-Louis du Sud, Haiti this morning. We send our deepest condolences to all those who lost a loved one or saw their homes and businesses destroyed,” Biden said in a statement Saturday afternoon.

He added: “The United States remains a close and enduring friend to the people of Haiti, and we will be there in the aftermath of this tragedy.”

The quake was felt as far away as Jamaica, which is 200 miles away, the New York Times reported. At least two cities — Les Cayes and Jérémie — reported major devastation, according to the newspaper.

Pierre, from Port-au-Prince, arrived Friday afternoon for a visit to his hometown.

Pierre told USA TODAY he was in the shower when he felt the first shake. At first, he thought there was something wrong with the shower but when the shaking continued, he ran out of the home with his friend and his friend’s young daughter.

Many others, afraid of a possible tsunami, fled to the mountains nearby, he said.

Pierre stayed in the street for 30 minutes as a minor aftershock shook the city. Phone lines were down for some time but he was eventually able to call his wife and children in the Dominican Republic, who told him they only felt minor shaking. Pierre’s brother in Port-au-Prince told him he had felt significant shaking but no one he knew had been hurt.

“Thank God they are all fine,” Pierre said. “Trying to confirm everyone is safe was a long process because you have to prepare for the worst.”

Pierre said there was no damage to the house he was in and only one neighbor had a small crack on the side of his house. But near the city’s main street, the destruction was more severe. He said many buildings, including a church, had been destroyed or damaged.

The earthquake forced many to relive the trauma of a magnitude 7 earthquake that devastated the country in 2010. More recently, a magnitude 5.9 earthquake in 2018 left more than a dozen people dead.

When the earth began to shake, Pierre said he braced himself for the worse, remembering the devastation of the 2010 earthquake, which took the life of his niece.

“It was 10 years ago but it is one of the scars that is never going to wear off,” he said. “It is something I will always remember.”

Silvera Guillaume, civil protection coordinator in the coastal city of Les Cayes, told the Washington Post the city deployed first responders to rescue people from the rubble but is badly in need of more resources for search and rescue efforts.

Améthyste Arcélius, administrator of Immaculate Conception Hospital in Les Cayes, told the newspaper the hospital is in “desperate” need of emergency drugs and health professionals as “the hospital is flooded with victims.”

People in Port-au-Prince rushed into the streets in fear after feeling the quake, according to the Associated Press.

Naomi Verneus, a 34-year-old Port-au-Prince resident, said she was jolted awake when her bed started shaking.

The earthquake comes just a month after the assassination of Haiti’s President Jovenel Moise left the nation in political turmoil.

“We’re concerned that this earthquake is just one more crisis on top of what the country is already facing – including the worsening political stalemate after the president’s assassination, COVID and food insecurity,” said Jean-Wickens Merone, spokesman for World Vision Haiti.

This story was first posted on: https://rssfeeds.usatoday.com/~/662328552/0/usatodaycomnation-topstories~Losses-will-be-high-Magnitude-earthquake-hits-Haiti-more-than-dead/