Florida could face 2 storm landfalls within days: Fred takes aim at Keys as another system forms 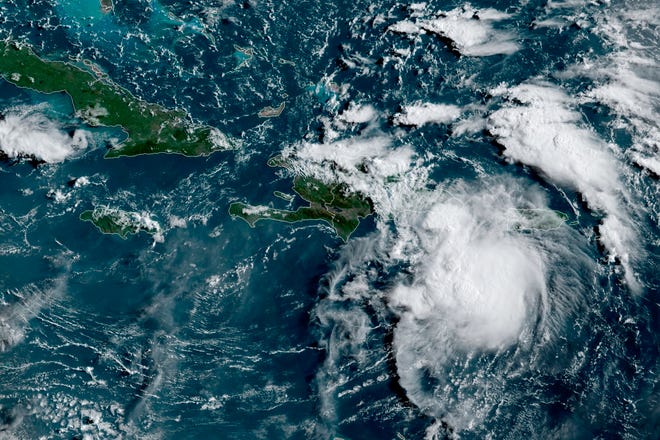 Tropical Depression Fred continued to dump heavy rain over parts of Cuba on Friday as the “disorganized” storm system slogged toward an expected Saturday landfall in the Florida Keys.

Meanwhile, another system in the Atlantic, Tropical Depression Seven, was forecast to become Tropical Storm Grace on Saturday as it nears the Caribbean.

A tropical storm warning has been issued for the Florida Keys and Florida Bay as Fred approaches. A warning means that tropical storm conditions are expected somewhere within the warning area within 36 hours.

“There is a good chance for two landfalls in the U.S. with Fred … likely in the Florida Keys early Saturday and the second likely over northern Florida by early next week,” AccuWeather meteorologist Bernie Rayno said.

The National Hurricane Center said 3 to 7 inches of rain were expected across the Florida Keys and southern peninsula by Monday, with isolated maximums of 10 inches. The National Weather Service in Miami issued a flood watch for all of South Florida due to the expected heavy rainfall.

The Hurricane Center cautioned to “not focus on Fred’s exact forecast track as heavy rainfall, gusty winds, and a chance of tornadoes will extend far to northeast and east of the center, and those hazards are likely to still affect portions of the Florida peninsula.”

As of 8 p.m. EDT Friday, Fred was about 175 miles southeast of Key West with maximum sustained winds of 35 mph. It was moving west at 12 mph.

Fred is expected to regain tropical-storm strength in the warm Florida Straits early Saturday before reaching the Keys as a 40-mph tropical storm, forecasters said.

After spending a brief time as a tropical storm earlier this week, Fred weakened back to a depression due to its spin over Haiti and the Dominican Republic, where it knocked out power to some 400,000 customers and caused flooding that forced officials to shut down part of the country’s aqueduct system, interrupting water service for hundreds of thousands of people.

Local officials reported hundreds of people were evacuated and some buildings were damaged. There were no immediate reports of casualties.

Fred became the sixth named storm of the Atlantic hurricane season late Tuesday as it moved past the U.S. Virgin Islands and Puerto Rico.

Behind Fred, the hurricane center said Tropical Depression Seven will become Tropical Storm Grace on Saturday. Tropical storm watches have been hoisted for some of the Leeward Islands.

The disturbance was about 580 miles east of the Lesser Antilles on Friday night and moving west at 22 mph. Maximum sustained winds were 55 mph. It was forecast to reach portions of the Leeward Islands later Saturday night and the Virgin Islands and Puerto Rico on Sunday and Monday.

This story was first posted on: https://rssfeeds.usatoday.com/~/662243772/0/usatodaycomnation-topstories~Florida-could-face-storm-landfalls-within-days-Fred-takes-aim-at-Keys-as-another-system-forms/