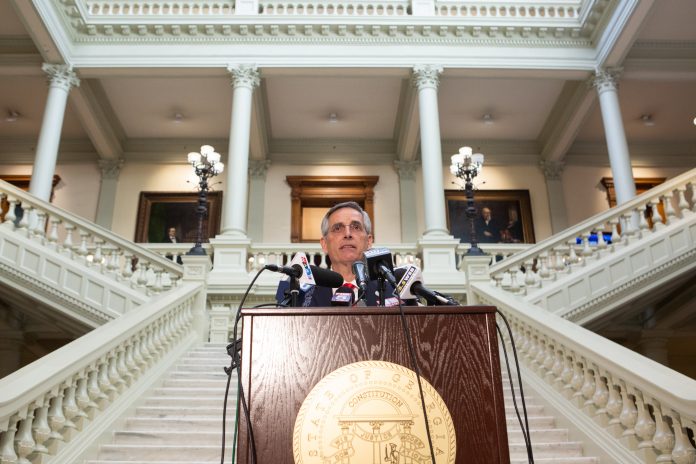 But when it comes to another form of political participation – giving money to candidates – it’s men who take the lead. We found that men gave more money than women to candidates in statewide elections for executive offices such as attorney general and secretary of state, between 2001 and 2020.

We found that men contribute more financially overall in statewide races, creating a large gender gap in political voice. This disparity exists in primary and general elections, across both political parties, and is seen in the most recent election cycle from 2017 to 2021.

Political contributions do not guarantee victory or political influence. However, helping candidates win through campaign contributions is a way to influence their policies once they’re in office. Indeed, some political science research finds that elected officials are more responsive to their donors than to other Americans.

So while candidates may court women’s votes on the campaign trail, they may be less interested in women’s priorities once elected.

State officeholders attract less public attention than the president and members of Congress, but we studied these races because the work of these officeholders has profound effects on people’s lives.

Secretaries of state, for example, administer state voting laws and elections, an increasingly high-profile and controversial role. State attorneys general make sure state laws are enforced. And they often work together to collectively challenge federal policies from Obamacare to immigration. A state’s elections are consequential both inside and beyond its boundaries.

Our study, done in collaboration with OpenSecrets, a nonpartisan research organization that tracks money in politics, found that from 2001 to 2020, female donors gave just 23% of general election contributions in statewide races for offices such as attorney general and secretary of state. Men donated 77%.

These results echo our companion report on gubernatorial elections. Other scholars who estimate both the race and gender of donors find that women of color represent the smallest percentage of donors.

The gender gap is not symmetric across the two major political parties. Women are a larger percentage of contributors to Democrats than Republicans in statewide races for offices such as attorney general and secretary of state, as is the case in congressional and gubernatorial races.

In some of the primary contests we examined, women are at parity with men as a proportion of contributors to Democrats. But overall, women constitute fewer than half of donors and provide less than half of the money raised by Democratic statewide candidates.

We find that winners usually raise more money than their opponents, confirming that money matters.

Resources are especially scarce for candidates who are women of color. There is a dearth of women of color in statewide executive positions, despite the election of Vice President Kamala Harris and record-setting numbers of women of color serving in Congress and state legislatures. No Black woman or Native American woman has ever won the office of governor in any state. Our research finds that women of color are raising less than white female candidates and that they are much less likely to seek statewide office.

The current number of female governors – eight – is one less than the historic high, first achieved in 2004. Without any major-party women among gubernatorial nominees in the two states with elections in 2021, no women will be elected governor this year.

According to several female statewide candidates and political practitioners we interviewed, men are more likely than women to have personal relationships with wealthy donors and access to networks of contributors; and donors and other political gatekeepers may believe, falsely, that women – particularly women of color – won’t be successful candidates, making fundraising harder for them.

Research shows that women have closed many long-standing political participation gaps such as volunteering in campaigns and contacting public officials. Gains in women’s educational and labor force opportunities have expanded women’s personal resources in terms of income and civic skills, facilitating women’s political giving. And women’s organizations and networks such as EMILY’s List, View PAC and Higher Heights have mobilized women to donate on a regular basis. Recent elections, including those in 2018, saw an increase in female donors

With the persistence of inequalities in earnings due to gender and race, and challenges wrought by the COVID-19 pandemic, the future of women’s giving is unclear. But as the 2022 election unfolds, observers can watch for whether women give – and not just whether women run.

[Get The Conversation’s most important politics headlines, in our Politics Weekly newsletter.]