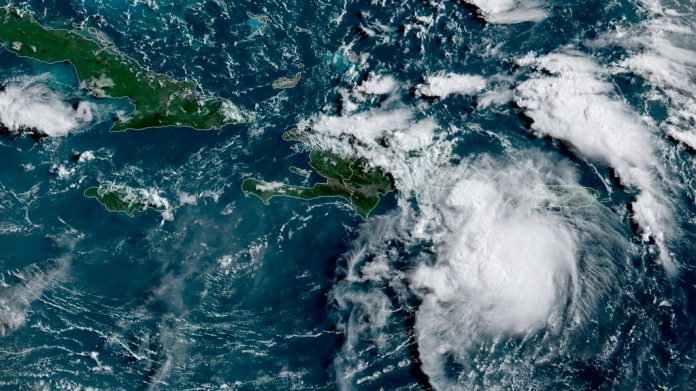 Downgraded to a tropical depression, Fred continued its trek toward the Gulf Coast on Thursday, prompting forecasters to issue a tropical storm watch for parts of South Florida, including the Florida Keys.

After a quiet month in the Atlantic hurricane season, Fred is the first named storm in August. The system drenched the Dominican Republic on Wednesday, knocking out power for hundreds of thousands and threatening mudslides.

The storm weakened as it moved through the Dominican Republic and Haiti, as expected, but it was forecast to regain strength as it moved over water and slows over the next couple of days, forecasters said.

Winds and rain could come to Florida as soon as Friday and the storm could possibly make landfall this weekend. Tropical storm conditions were expected by Saturday, and multiple landfalls were possible in the state, according to the National Weather Service.

“These conditions are expected to spread northward along portions of the Florida west coast and the Florida Panhandle through Monday, with another landfall in the Panhandle on Monday,” said Dennis Feltgen, a National Hurricane Center meteorologist.

The storm was not expected to reach hurricane strength.

The National Hurricane Center issued a tropical storm watch for parts of South Florida on Thursday evening. The watch included the Florida Keys and stretched north along the western coast of the state to Bonita Beach, about 20 miles south of Fort Myers.

It’s expected to dump anywhere from 3 to 6 inches of rain across the Florida this weekend, with some areas possibly seeing 8 inches and isolated flooding.

Calling the storm “poorly organized,” the hurricane center said Fred had slowed by Thursday night and was about 485 miles east-southeast of Key West in Florida and 240 miles southeast of South Andros Island in the Bahamas as of 8 p.m. EDT. It was moving west-northwest at 7 mph with maximum sustained winds of 35 mph.

On Tuesday, Fred reached tropical storm status before it brought heavy rains and power outages to Puerto Rico and the U.S. Virgin Islands.

About 13,000 customers were without power in Puerto Rico. Gov. Pedro Pierluisi had closed government agencies on Tuesday, and some gas stations shut down after running out of fuel.

Power outages were more widespread in the Dominican Republic: About 300,000 customers were in the dark after Fred passed through. Flooding caused part of an aqueduct system to shut down, government officials said, and people in low-lying areas of Santo Domingo were urged to evacuate. Mudslides were still a risk, forecasters warned.

Heavy rains were expected in the eastern Bahamas, Turks and Caicos and Cuba, and some areas of those islands could get up to 5 inches. Parts of the western Bahamas could see up to 8 inches.

The exact path of Fred remains unknown, which makes predictions about its intensity in Florida tricky, forecasters said. The Hurricane Center’s official path places Fred over the eastern Gulf of Mexico after passing through the Florida Keys.

That would mean additional strengthening, and Fred could make a final landfall in the Big Bend region or Panhandle late in the weekend or early next week. But earlier landfalls would weaken the storm, forecasters said.

Gov. Ron DeSantis urged Floridians on Wednesday to watch for updates on Fred’s track but said it remained too early to determine the threat to the state.

Fred is the sixth named storm of the 2021 hurricane season and first in August, breaking a monthlong lull after Hurricane Elsa formed July 9.

Elsewhere in the tropics, another system has a 70% chance of development over the next five days as it spins between Africa and the Caribbean.

The tropical wave was about 1,200 miles east of the Lesser Antilles early Thursday, but ocean conditions could help the system develop in the coming days.

If the system becomes a named storm, it would be Grace.

This story was first posted on: https://rssfeeds.usatoday.com/~/662133540/0/usatodaycomnation-topstories~Tropical-storm-watch-in-effect-for-parts-of-South-Florida-as-poorly-organized-Fred-swirls-past-Cuba/