The Dixie Fire has been burning for a month in California. Here’s what it’s like on the front lines. 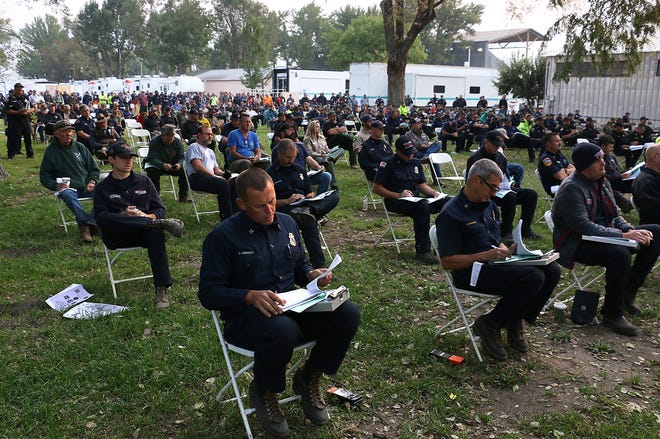 SUSANVILLE, Calif. — With bleary eyes and coffees in hand, hundreds of firefighters gather outside for yet another briefing on the Dixie Fire one early August morning.

From folded chairs on the Lassen County Fairgrounds, they listen to the plan of attack as the nation’s largest current wildfire continues its unrelenting march across the exceedingly dry Northern California landscape, scorching entire communities in its path.

Within moments of the end of the 30-minute briefing, firefighters climb into the back of trucks to prepare for another grueling day.

Such is life on the front lines of the Dixie Fire, which has blackened nearly 520,000 million acres, or more than 800 square miles, since sparking July 13 in Plumas County. How big is that? The fire is now covering nearly as much land as Jacksonville, Florida, the largest city by area in the continental U.S. at about 875 square miles.

The second-largest fire in California history, which has destroyed more than 1,100 structures, including hundreds of homes and the historic Mount Harkness Fire Lookout at Lassen Volcanic National Park, was 31% contained as of Friday morning, according to Cal Fire.

About 6,000 firefighters have spent weeks battling the blaze, working 12- to 24-hour shifts at a time. Many are hundreds, even thousands, of miles away from their families and friends and rely on each other for support.

“The hardest part about all of this is spending time away from your family,” says Jeremy Hollinsghead, a Yuba City firefighter.

“The biggest thing is trusting each other, because we are going into dangerous environments and we do depend on each other to have each other’s backs in those situations,” he said. “What’s unique about the fire service is that we are a family, we’re all brothers and sisters out here working toward a common goal to protect life and protect property.”

As the sun rises in a smoke-tinged sky, fire trucks roll out of the base camp in Susanville to make the long drive to the front lines.

The fire crews drive past roadblocks secured by National Guard vehicles stationed to keep people away from the flames.

An hour of driving and three checkpoints later, Hollingshead and firefighter Luis Jimenez meet Yuba City Fire Captain Matt Johnson near an island of homes surrounded by trees that crews are furiously working to protect. Smoke billows nearby.

Hollingshead and Johnson share a brief hug before Johnson talks business: This is how the fire is behaving and these are the homes that are in immediate danger.

Only one house is in view through the tall pine trees.

Children’s toys and kayaking equipment dot the property. Hollingshead pulls a vehicle to the bottom of its driveway.

Parked just a bit up the inclined driveway, a fire truck blocks the path to the house. It’s dosing smoldering dirt and grass with water.

“Even if the forest burns, we’re going to save these homes, that’s our goal,” Johnson said.

Along the curved dirt driveway covered in pine needles that leads to the home, a group of firefighters place their bare hands to the ground. They’re feeling for hot spots still burning underground. Any hot areas will need to be dug up.

Johnson walks up a rocky pathway behind the house to get a better view of the large plume of smoke. Flames are headed east downhill toward the home.

Johnson said it’s a spot fire. It’s not big yet.

“But if we don’t put it out today, it’ll wrap around behind this house and burn it down tomorrow,” Johnson says.

Even tiny, blackened patches of smoldering dirt and grass need to be taken seriously. Those patches can grow into walls of fire.

A nearby crew hacks away at the grass and sprays water over it. They do their best to stomp out each flame that could threaten the island of homes just off the road.

“The work is very labor-intensive but the good part is that we take a small part of that workload,” Johnson said. “If we work together with hand crews, engine companies and dozers, we all share the load.”

The crews work near trees marked with red ‘warning’ posters.

Johnson calls them “killer trees” – they often fall over.  They’re considered one of the greatest threats to hand crews, Johnson says.

Hollingshead and Jimenez leave Johnson and his team to head toward the flames.

The pair pass two firefighters furiously digging out the grass around a shed near a house. They strip the grass down to the dirt. Maybe they’ll stop the fire from burning those structures.

After long hours on the fire line, firefighters then make the drive back to base camp, eat and try to rest before getting up the next morning to do it all over again.

But, Johnson cautioned, there won’t be much time for sleep.

“You have to drive two hours back to camp, reset your engine hose supply, then eat dinner, then take a shower,” he said. “And by the time you finally get your rest period, it can be as late as midnight.”

For the thousands of firefighters, the work doesn’t end until the fire does.

No matter how demanding it is, Hollingshead said firefighters know they have each other to rely on until they get back to the families they left at home.

“The best thing about it is that our leadership is amazing in the fire service and, for the most part, it’s a lot of experienced people that you can trust and depend on like family,” Hollingshead said.

This story was first posted on: https://rssfeeds.usatoday.com/~/662258962/0/usatodaycomnation-topstories~The-Dixie-Fire-has-been-burning-for-a-month-in-California-Heres-what-its-like-on-the-front-lines/