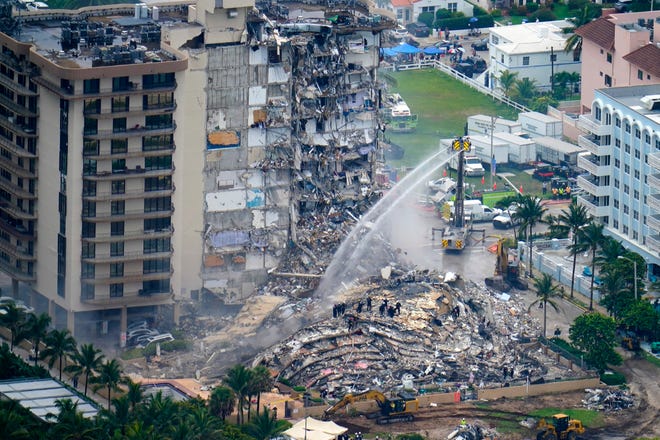 The 2021 Netflix series “Cocaine Cowboys: The Kings of Miami,” which chronicles the illegal drug trade that took place in Miami during the 1970s and 1980s, featured the once-beautiful building of Surfside now subjected to disaster: the Champlain Towers building.

The series, directed by Billy Corben and produced by Alfred Spellman and David Cypkin, is about how drug lords used the city of Miami as a way to smuggle cocaine into the country. Throughout the documentary series, Corben interviews law enforcement and former drug smugglers to provide perspective into what happened during the 1970s Miami drug war.

Pedro “Pegy” Rosello, a former drug smuggler who was arrested in the mid-1990s, tells Corben he owned a unit on the fifth floor of the Champlain Tower. In episode two of the series, he begins to tell his story.

“He [Pedro] meets a woman. They’re both probably in their late teens, early 20s at this point in 1987,” Corben tells USA TODAY.

Alexia Echevarria, now a “Real Housewives of Miami” star, is the one Rosello clicks with. They meet at a restaurant and days later, by coincidence, they spot each other at a new nightclub.

“He was in the VIP area, he spotted his friend, spotted her, recognized her from the restaurant, invited her to join them in VIP,” Corben says. “She is very briefly in kind of a momentary love triangle with Jose Canseco, Pegy and herself. He kind of steps up and the two become an item.”

The couple then hung out in Miami Beach and went back to his apartment in the middle of the night, when he receives a phone call prompting him to leave.

Little did Echevarria know at the time that it was a shipment of cocaine he had to pick up because she didn’t know what business he was in, according to Corben.

“But that is the purpose of that story, to just reveal what you already know which is that apartment unit was in Champlain Tower South, which is a fact that we don’t reveal in the documentary,” Corben says.

“When we were talking about it during the interview, it obviously seemed incidental. Obviously, it didn’t become hyper-relevant until a very short time ago, and the documentary was just released Aug. 4.”

The relationship between real estate and drug dealing was apparent during the 1970s, according to Corben. Willie Falcon, along with his partner, Sal Magluta, operated one of the most significant cocaine trafficking organizations in U.S. history, and they had a network of people operating for them. Rosello included.

“They were accused of smuggling over 75 tons of cocaine worth over $2.1 billion,” Corben says. “Pegy, in episode three of the series, believes that that estimate by the government was extremely low, and places it closer to 175 tons over the course of their rather lengthy smuggling careers.”

According to Corben, Miami in the 1980s during the cocaine boom can be explained by Ronald Reagan’s trickle-down economics.

“The money from the drug trade is literally going everywhere and one of the most prominent places it went into was our number one industry, real estate, which generated $9 billion a year, and the drug trade was estimated to bring in $12 billion a year into our local economy,” Corben says.

The thesis of Corben’s 2006 original documentary film, “Cocaine Cowboys,” was that drug money effectively built the city of Miami in the midst of a worldwide recession.

“It turns out that Willie Falcon and Sal Magluta in fact started a construction company where they were building,” Corben says. “They were more into residential units and buildings than they were condos but they were not the only drug traffickers at the time who were involved in real estate.”

Corben adds that it happens to be an “extraordinary” and “tragic” coincidence that Rosello’s story took place in Champlain Towers.

“I was like, ‘Holy crap, I think that’s where that’s where this story takes place,’ ” Corben says. “We had this incredible anecdote that was charming and romantic and funny and bizarre, but that it happens to take place in the sight of this horrific tragedy, which was not something that was on our radar when we were editing this until this summer.”

This story was first posted on: https://rssfeeds.usatoday.com/~/662197624/0/usatodaycomnation-topstories~Champlain-Towers-involved-in-the-s-Miami-drug-wars-and-Netflixs-Cocaine-Cowboys/

Share
Facebook
Twitter
Pinterest
WhatsApp
ReddIt
Previous article‘Not going away’: More than 9K anti-Asian hate incidents since COVID pandemic began, report says
Next articleThe Internet Archive has been fighting for 25 years to keep what’s on the web from disappearing – and you can help