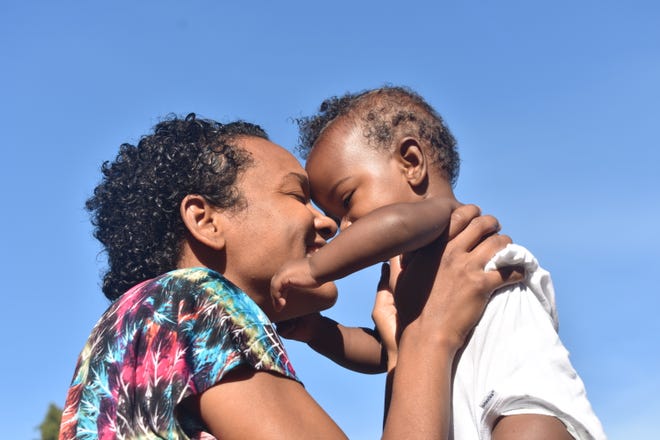 One-time “American Idol” finalist Syesha Mercado is now fighting for the return of two children removed by Florida authorities within the past six months.

On Wednesday morning, Manatee County sheriff’s deputies surrounded a car carrying Mercado, her 10-day-old baby girl and her partner, Tyron Deener. Authorities then took custody of the baby to bring her to the hospital.

Deener broadcast the nearly hour-long encounter on Instagram Live. The video shows several sheriff’s vehicles nearby with flashing lights, and two deputies providing the couple with a court order to turn over the baby for a checkup at the hospital.

Mercado and Deener told the deputies the baby had been seen by doctors the day before. They also said they were on their way with the baby to the sheriff’s office at 8 a.m. Wednesday and were told no one was available.

After a court hearing Thursday morning, the baby was still in protective custody, according to Donisha Prendergast, a founder of the organization We Have the Right to be Right, which works to support a variety of social justice issues.

For more than three months, the couple has been working for the return of their 15-month-old son, Amen’Ra, who was placed into foster care after what the couple thought was a routine trip to the hospital. The couple was concerned about malnutrition after Mercado’s breast milk supply started to run dry, and the boy would not accept other fluids.

They took him to Johns Hopkins All Children’s Hospital in St. Petersburg on Feb. 26. Nearly two weeks later, St. Petersburg Police removed the parents from the hospital for trespassing. When the boy was discharged in late March, he was put in foster care over allegations of malnutrition.

Mercado said at the time she was never notified that her son had been discharged and child welfare officials did not talk to any family members for possible placement.

While still engaged in a legal battle for custody of her son, Mercado gave birth to a baby girl. Deputies indicated during the recorded confrontation Wednesday that the couple didn’t notify authorities about the child.

Deener is heard on the Instagram video saying that because of past situations, they have asked that all inquiries about Mercado and the baby be directed to their attorney, and “they didn’t do that.” The attorney was seen pacing across the road as the standoff unfolded.

Before caseworkers could take the girl, she began screaming and Mercado breastfed her and provided authorities with a bottle of breast milk. Mercado broke down in tears as she carried the baby to another vehicle.

“You have no heart. My baby is days old, and you’re taking my baby away from me,” Mercado screamed as a caseworker repeatedly asks her to put the baby in the car. “My baby is healthy. My baby is happy.”

Mercado has been outspoken on social media since Florida authorities took her son as she fights to bring her children home.

“They stole our baby from us … this major injustice is not just against MY family, but families all over. Some are suffering in silence. But we will NOT be silenced by this act of terror and injustice,” Mercado wrote on Instagram last week of her son, Amen’Ra, being taken. “We are stronger, wiser, and more resilient because of it.”

“Help contribute to our legal fund,” she wrote on Twitter, sharing a GoFundMe link. “It takes a TEAM and a BIG backing to go up against a BIG system. Thank you all for the support. We appreciate you all.”

Many on social media have also rallied behind the family to offer support and help share her story.

Twitter user @_MissSith wrote: “I’ve been so heart broken by this since reading their story yesterday morning and I all I want is for this family to be reunited with their baby.”

“To all the Twitter friends, please pay attention to this story. Reach out and help anyway possible. This can happen to any parent in the US,” tweeted @TeddAbramson.

Mercado is a 2005 graduate of Booker High School’s Visual and Performing Arts Center in Sarasota, Florida, and was the third-place finalist in the seventh season of “American Idol” in 2008 behind David Archuleta and the winner, David Cook. She later toured in the musical “Dreamgirls” and performed in the touring and Broadway companies of “The Book of Mormon.”

She was given a key to her hometown of Sarasota on May 9, 2008, proclaimed to be Syesha Mercado Day.

Prendergast said she believes the “couple is being targeted.”

“This family has chosen to stand up for their rights,” she said. “They are being targeted as an example.”

Prendergast said that in an open case such as the one involving Mercado, authorities “have a right to her unborn child. If they see fit, they can remove the baby.” Prendergast said she advised Mercado “to stay as firm as possible” despite the high emotions in the situation.

As the Herald-Tribune, part of the USA TODAY Network, reported in May, the Mercado case involves physician Sally Smith, the head of the children protection team for Pinellas County.

Smith oversees nearly every case at All Children’s Hospital involving suspicious injuries. She is considered one of the most powerful figures in the regional child welfare system and has long been criticized by defense attorneys, parents and child welfare employees for her aggressive approach.

In some cases, she saw injuries others doctors did not.

The USA TODAY Network, as part of an investigation of Florida’s child welfare system, previously reviewed hundreds of Smith’s cases and found more than a dozen instances where charges were dropped, parents were acquitted or caregivers had credible claims of innocence yet suffered irredeemable damage to their lives and reputations. Smith previously denied “any problems with my work.”

Prendergast said police brutality has helped to highlight the injustices in the system when it comes to Black people.

“Will Ra ever be able to tell you what he’s experiencing?” she said. “Our children don’t have video cameras to show how they’re being treated.”

This story was first posted on: https://rssfeeds.usatoday.com/~/662203914/0/usatodaycomnation-topstories~Authorities-take-second-child-from-American-Idol-star-Syesha-Mercado-prompting-outcry/