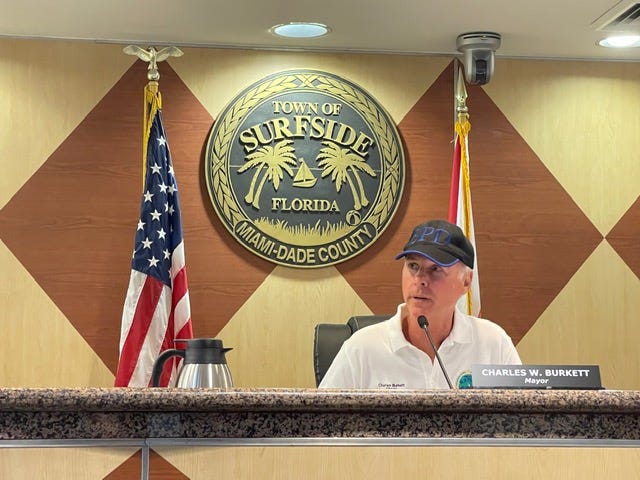 SURFSIDE. Fla. – In the days after  the collapse of Champlain Towers South, town, county, state and federal officials worked side by side,  laser-focused on finding survivors, recovering victims and providing support to the families of the missing, dead and displaced.

Almost two months later, Surfside officials are livid at the lack of progress to investigate why the 12-story, 136-unit oceanfront condominium complex collapsed in the middle of the night June 24, killing 98 people.

Town leaders accused the county and court-appointed property receiver of blocking access to the collapse site and recovered debris, which is stored in offsite warehouses and critical to the town’s investigation. They fear the National Institute of Standards and Technology could compromise some of that evidence.

Almost seven weeks after the collapse, the Surfside Town Commission said Tuesday it is done waiting.

The commission voted unanimously to pursue legal action against Miami-Dade County, the court-appointed receiver for Champlain Towers South and any other entities preventing the town’s hired expert – Allyn Kilsheimer of KCE Structural Engineers – from accessing the collapse site and warehouses.

“We’ve had the preeminent world-class expert on the site since the beginning ready to go, and he’s been shut out,” Surfside Mayor Charles Burkett said of Kilsheimer.

In the course of his investigation, Kilsheimer found that two of nine other buildings he has inspected in Surfside required immediate shoring and bracing, and he recommended those associations hire engineers to complete further assessments.

It is indicative of how potentially pervasive structural issues might be with older complexes, particularly on the water, and underscores the need for a timely and thorough investigation into what caused the Champlain collapse and how other buildings might or might not face similar problems, officials said at Tuesday’s meeting.

Miami-Dade County Mayor Daniella Levine Cava “did a marvelous job, and has done and continues to do a marvelous job,” Burkett said. “However, with respect to this very, very narrow issue, I think there is a loss of focus.”

Burkett told The Palm Beach Post, part of the USA TODAY Network, that he believes the glacial pace of the county to either pursue its own investigation or enable the town to complete its inquiry, could result in tragedy.

“The people that eventually make the decisions on whether to immediately proceed with an investigation as to why the building fell down are the ones that are ultimately going to be responsible if, God forbid, we end up with a catastrophe in our town again,” Burkett said. “And that’s not something I want to be anywhere near.”

When asked why Kilsheimer was not granted access to the debris, Levine Cava’s office referred to her July 29 reply to a letter from Burkett, in which she wrote it is “essential that we get answers and accountability about exactly what happened,” and that the “safety and well-being of every single resident of Miami-Dade” is her “top priority.”

Levine Cava encouraged Surfside to inspect Champlain Towers North, which is the “sister” building to the one that collapsed, as well as any other buildings within the town’s jurisdiction.

She wrote that the county’s process of hiring a forensic engineer to investigate the collapse was “well underway” and that it is “vital that the investigation move forward as speedily as possible while maintaining the integrity of the collapse site and all evidence.”

As such, she concluded, “access to the site has been limited.”

‘They want this to go away as fast as possible’

The county has not hired an engineer. Burkett pointed out that the county did not even put out an online post for the forensic engineer position until July 28 – five weeks after the collapse.

“At the present time, we have not extended a contract to a forensic engineer, we are still in the procurement process,” a spokesperson from the department wrote in a recent statement.

Surfside Commissioner and former prosecutor Eliana Salzhauer said she might know why.

“I don’t think anybody wants to hear the truth, because the truth is going to cost them money,” she said at Tuesday night’s meeting. “They want this to go away as fast as possible.”

Salzhauer said the receiver wants to get as much money as possible for the families and the county wants the spotlight off a problem that could devalue properties.

“NIST is not going to determine why the building fell down,” Kilsheimer said. “They are going to come up with what materials should be used in certain environments, change building codes, make suggestions – like a bureau of standards. They are not forensic collapse experts.”

Kilsheimer is ready to proceed with an investigation into the cause of the Champlain collapse, he said, be it on behalf of Surfside or the county. Residents want answers, he said.

“We, on almost a daily basis, get several phone calls from people that live in that area that want us to talk about if their building is safe, are they safe,” Kilsheimer said.

Levine Cava’s office said it is not the county but the court-appointed receiver for Champlain Towers South – an attorney out of Fort Lauderdale – prohibiting Kilsheimer access to the debris. Her office provided the Post a letter from the receiver dated July 29 saying as much.

That receiver, Michael Goldberg, did not respond to verbal and written requests from the Post to explain why or at who’s directive he determined Kilsheimer should not have access to the collapse site or the stored debris and if or when he has any intention of granting that access.

At a hearing Wednesday morning in Miami, a judge handling the receivership warned Goldberg that no destruction or alteration of evidence will be permitted.

In response, Goldberg said he spoke with NIST official Judith Mitrani-Reiser, co-leader of a team of scientists conducting a preliminary investigation into Surfside, and she stressed that NIST was testing in the least invasive way possible.

Burkett said he is beyond frustrated that NIST is processing evidence without Kilsheimer and that the county is not investigating the cause of the collapse.

He offered to release Kilsheimer from his contract with Surfside or assign that contract over to the county so an investigation can move forward expeditiously but said the county has not accepted that offer.

“We all just want to find out why the building fell,” Burkett said. “We don’t need Surfside to do the investigation; we just need an investigation to be done quickly.”

Levine Cava’s office told the Post that neither Burkett nor Kilsheimer offered Kilsheimer’s services to the county and that Kilsheimer failed to formally apply for the job when it was posted online.

Burkett said Kilsheimer had been conducting an investigation for five weeks at that point and “everyone” knew it.

“It’s really hard for me to believe that anybody was confused about the fact that Surfside would be willing to make Mr. Kilsheimer available to do any work whatsoever related to determining the cause of the collapse, which would have included uncontracting his services with us and helping him to get on board with the county,” Burkett said. “We still have lives at risk, and we need to get to the bottom of this.”

The Miami Dade Police Department did not respond to a request to explain if Kilsheimer was ever considered for the county job and why or why not.

‘Rolling the dice on their lives’

Kilsheimer, a 64-year veteran of building collapse investigations, has investigated about 30 to 40 collapses, he said, including the Pentagon after 9/11, the Florida International University bridge collapse in 2018 and the Oklahoma City bombing in 1995. He’s been involved in probes around the world, including Kuwait, Saudi Arabia and Turkey.

He said inspecting the south tower debris is critical to determining not only why it fell but whether the “sister” building – Champlain Towers North – which has been subject to voluntary evacuation since shortly after the south tower fell, is safe for occupancy.

“Who’s willing to roll the dice on the lives of those people in that building? And if you are not focusing on that as your No. 1 concern, I would submit you are rolling the dice on their lives,” Burkett said.

Champlain Towers North, three lots north of the south tower, was built at the same time by the same developer and with similar plans, Burkett pointed out in his letter to Levine Cava, and probably used the same contractor and similar materials.

Until there is an official determination as to what caused the south tower to fall, there is an imminent concern for the safety of those in the surrounding areas.

Though Kilsheimer initially said the north tower was safe, he said a deeper investigation of the south tower needs to be done to confirm that, and not enough is known about the construction of either tower to ascertain any risks to north tower residents.

“On neither building is there any information about load tests, and they don’t even give the length of the pilings,” he said about records that would typically indicate the standards to which both towers were initially built. “They don’t exist. The only records we have are the drawings this town has.”

Kilsheimer based his earlier assessment of the north tower based on preliminary inspections, engineering analyses and “random” concrete samplings of that building. Because it is virtually impossible to safely access the foundation in an occupied complex, he said, he cannot unequivocally guarantee a zero risk of structural failure.

“My level of concern is, there are things that I don’t know,” he said.

NIST has said its investigation could take years. Levine Cava’s spokesperson would not give an estimate on how long the county’s investigation might take once an engineer is hired, and Miami Dade police did not respond to a request for a time frame.

Kilsheimer said that if given access to the debris, he could conclude his investigation within “months.”

“I don’t understand why, whoever is really trying to understand why this building fell down, can’t go with the team we have or somebody equal to that team,” he said. “They have a reason. Why? I don’t know.”

This story was first posted on: https://rssfeeds.usatoday.com/~/662162280/0/usatodaycomnation-topstories~Surfside-condo-collapse-Town-leaders-fuming-at-obstacles-to-investigation-aim-to-sue-county/