‘Political football’ or ‘mountain out of a molehill’? South Dakota officials clash over Indigenous education standards 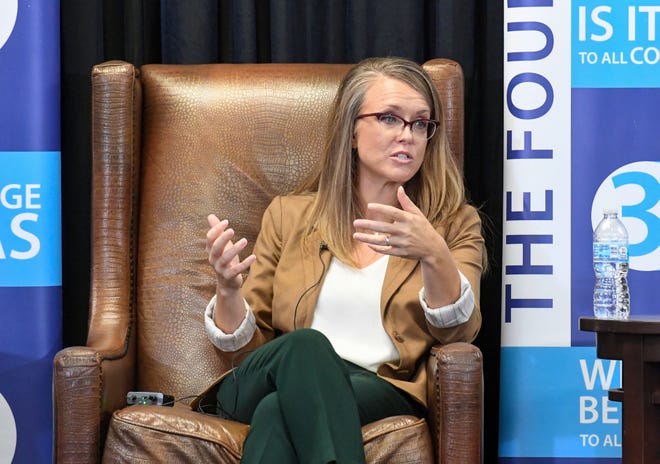 SIOUX FALLS, S.D. — Before the South Dakota Department of Education released a draft of new social studies standards last week, department officials took out more than a dozen references to education on the Oceti Sakowin.

Some of the more than 50 members of the workgroup that handled this year’s review, a cohort that includes K-12 educators, post-secondary representatives, parents and representatives of business and industry, are speaking out against the changes. One described a game of “political football.”

Others in the workgroup, however, say those members are “making a mountain out of a molehill.”

The Sioux Falls Argus Leader, part of the USA TODAY Network, obtained a draft of the standards dated July 26 that differed greatly from what the DOE released on Aug. 6. Changes show department officials removed more than a dozen references to education on the Oceti Sakowin, which refers collectively to the Lakota, Dakota and Nakota people who are Indigenous to South Dakota and surrounding states.

Their out-in-the-open debate follows July news that a pair of conservatives quit the workgroup without publicly saying why.

The influence of Gov. Kristi Noem

The move by the education department follows first-term Gov. Kristi Noem’s recent statements in support of “honest, patriotic education that cultivates in our children a profound love for our country.”

Noem, a Republican, also cited concerns this spring about how the state must do a better job educating teachers on civics, that the U.S. has “failed to educate generations of children about what makes America unique,” and that the “left” is “indoctrinating students.”

Standards reviews are done on a cyclical basis at the state level, and these drafted changes are separate from Noem’s $900,000 push for the state to create a South Dakota-specific history and civics curriculum.

Mary Stadick Smith, deputy secretary for the DOE, said in an email this week that the department made “certain adjustments” before the release of the Aug. 6 draft to provide “greater clarity and focus” for educators and the public.

Opportunities to teach about South Dakota-specific events, people, culture and government were expanded beyond fourth grade where those standards previously resided, Smith said.

The draft of standards dated July 26 approved by the workgroup, however, shows multiple grade-level standards referring to the Oceti Sakowin Oyate, compared to three mentions of Oceti Sakowin in the draft released publicly 10 days later.

Ian Fury, Noem’s communications director, said Noem’s top priority is teaching students a broader understanding of history, including the voices of all South Dakotans in concert with the “building of the most exceptional democracy the world has ever known.”

With Oceti Sakowin standards the DOE adopted in 2018 and the “substantial increase” in curriculum on Native American history, culture and government in the present standards, the state is ensuring students “learn the full story of our great state and nation,” Fury said.

A game of ‘political football’

Paul Harens, a retired teacher who taught for more than 30 years in the state, said most of the workgroup is upset with the changes – particularly the reduction in mentions of the Oceti Sakowin.

“We were told to ignore the publicity and do what was best for the students of South Dakota,” Harens said. “We made it apolitical and did not take sides, but it is now a political document.”

Harens has since asked his name to be removed from the workgroup process.

“They are making it a political football, and it shouldn’t be,” Harens said. “What we did was for the good of the students.”

Sherry Johnson, education director for the Sisseton Wahpeton Oyate, said she was disappointed with the changes because the workgroup had been dedicated to create standards with inclusivity and multicultural perspectives.

“Now, I look at those standards, and there’s whole standards stripped out of there,” Johnson said. “It’s like the present-day erasure of Native Americans, once again.”

Stephen Jackson, a professor at the University of Sioux Falls, said he was confused by the changes and that the process of standards review unfolded “far differently” than members were told it would.

The DOE made extensive changes without consulting the workgroup, Jackson said, adding that he believed changes of this extent are “unprecedented.” Harens concurred.

Harens, Johnson and Jackson said the DOE did not let workgroup members see any of the changes until the standards document was released this month.

Loren Paul, president of the South Dakota Education Association which represents K-12 educators in the state, said he’s concerned with the changes, specifically the removal of items addressing the culture and history of the state’s Native American students.

“SDEA believes the citizens of the state must have the opportunity to review and comment on the merits of the full proposal as presented by the work group,” Paul said. “We urge the South Dakota Board of Education Standards to look at the full draft of the social studies work group as it reviews the standards for adoption.”

But Sen. Jim Bolin, another member of the workgroup, said it was clearly stated at numerous times that the standards would go to the DOE for potential revisions.

“You weren’t listening if you didn’t hear that there was at least the potential for adjustments to be made,” Bolin said, adding he considers the changes to be “modest and minor.”

Those concerned about the department’s changes, Bolin said, are “trying to make a mountain out of a molehill.”

Fred Osborn, a workgroup member and the director of the South Dakota Office of Indian Education, said the standards won’t change the mission of his office topromote education on Native American history and culture through the Oceti Sakowin Essential Understandings.

While South Dakota does have curriculum standards on OSEUs, the DOE has said it’s not sure how broadly these teachings are used in schools. Johnson pointed to the fact that those OSEUs aren’t mandatory.

Indigenous educators have said they believe state mandates of education on OSEUs would benefit all students.

Other states like North Dakota have mandated education on Native American history for K-12 students. But, South Dakota has a history of shooting down proposals to further Indigenous-led education initiatives. A bill to require OSEUs be taught in schools failed this spring.

Next steps for the social studies standards include four public hearings between now and 2022 until the Board of Education Standards takes them up for approval by spring 2022.

More than 30 teachers on the workgroup did not respond to requests for comment from the Argus Leader.

The DOE is accepting public comment on the standards online.

This story was first posted on: https://rssfeeds.usatoday.com/~/662172648/0/usatodaycomnation-topstories~Political-football-or-mountain-out-of-a-molehill-South-Dakota-officials-clash-over-Indigenous-education-standards/