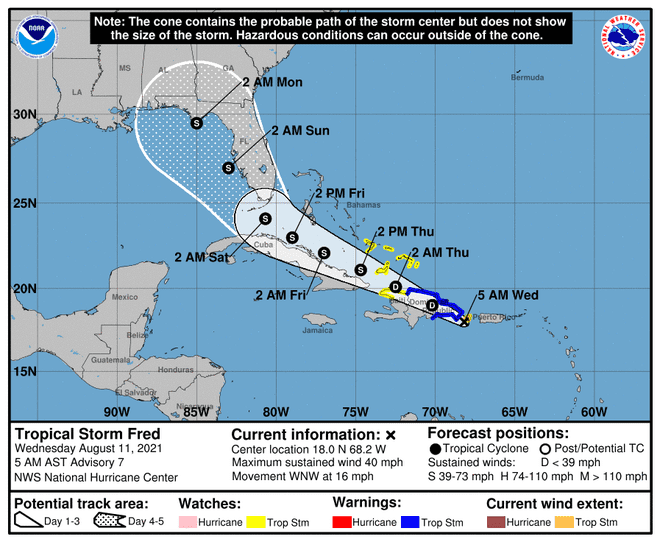 Fred, the first named storm in a month, was downgraded to a tropical depression on Wednesday night but expected to strengthen again ahead of landfall in Florida, possibly as early as Friday.

The risk of Fred impacting the Sunshine State was increasing as it brought heavy rain and flooding risks to the Caribbean island nations of the Dominican Republic and Haiti, according to the National Hurricane Center.

Fred reached tropical storm strength late Tuesday and drenched the U.S. Virgin Islands and Puerto Rico, knocking out power in some locations. The storm weakened to a tropical depression, as expected, as of 8 p.m. EDT but forecasters say it will gain momentum en route to Florida, potentially bringing severe weather to the bottom of the peninsula before the weekend.

“There is an increasing risk of wind and rainfall impacts in Florida beginning Friday night or early Saturday,” the Hurricane Center said. “Beginning Friday, heavy rainfall could lead to areal, urban, and small stream flooding, and possible rapid river rises across southern Florida.”

Fred is the sixth named storm of the 2021 hurricane season and first in August, breaking a month-long lull after Hurricane Elsa formed July 9.

Where is Tropical Depression Fred?

The center of Fred crossed the Dominican Republic on Friday night and was bringing heavy rains over the Caribbean island nation and Haiti. The storm was heading west-northwest at about 15 mph.

What do the spaghetti models forecast for Tropical Depression Fred?

The National Hurricane Center says some models show Fred will track “near or over the Florida Peninsula,” while others show it passing southwest of the Florida Keys.

When is Tropical Depression Fred expected to make landfall?

Fred made landfall in the Dominican Republic on Wednesday. A weekend landfall in Florida is possible, forecast say.

How strong is Tropical Depression Fred?

Maximum sustained winds reached 40 mph Wednesday before Fred was downgraded to a tropical depression with 35 mph winds at 8 p.m. EDT.

It could bring isolated patches of rain up to 8 inches in parts of the Dominican Republic, causing flash flooding and mudslides, the Weather Service said.

In Haiti, the Turks and Caicos, eastern Bahamas and eastern Cuba, rainfall up to 5 inches was possible, the Weather Service said. The western Bahamas could see 3 to 5 inches, with isolated areas up to 8 inches.

This story was first posted on: https://rssfeeds.usatoday.com/~/661984154/0/usatodaycomnation-topstories~Fred-downgraded-to-a-tropical-depression-forecast-to-regain-storm-status-before-Florida-landfall/