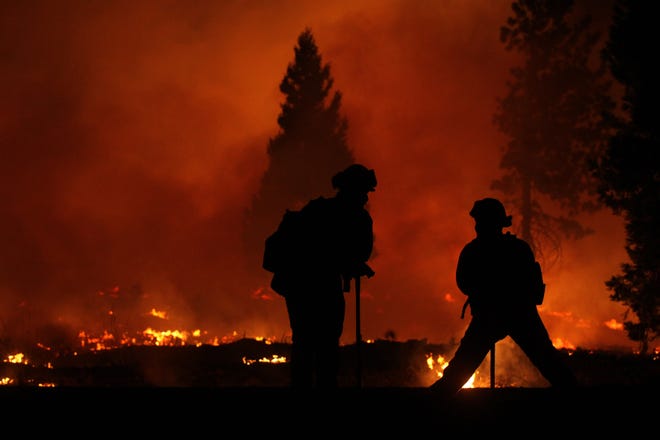 REDDING, Calif. — As more than a half-dozen major fires blaze across drought-parched Northern California, the weather outlook is so bad experts are predicting some may continue to burn until late fall or early winter rains arrive.

In the near term, the waves of heat, wind and potential lightning are set to make firefighters’ tasks even more difficult as they seek to protect thousands of homes and beloved outdoor spaces.

“We have extreme, critical drought — as we’re all aware of,” said Rocky Opliger, an incident commander on the Dixie Fire, at a recent community briefing. “We’re probably six to eight weeks ahead of what the normal fire season is.

“We have angry fire on a landscape that makes it very difficult to contain.”

On pace for record-setting wildfire season

The 2021 fire season is on pace to explode past 2020, which was a record-setting year in California as 6,718 square miles burned.

In 2021, there have been 6,272 fires statewide that have burned about 1,432 square miles, according to California Department of Forestry and Fire Protection latest weekly statistics. For the same time period last year, 5,636 fires had consumed 430 square miles.

A “constellation of factors” that include climate change, denser forests due to a history of fire suppression and extreme drought are triggering more intense and faster-moving wildfires, said Daniel Swain, a National Center for Atmospheric Research fellow and climate scientist at the University of California, Los Angeles.

“Hotter means that literally the flame lengths may be longer, or the vegetation is more receptive to spot fires,” Swain said.

The Reno weather office retweeted a photo Tuesday from weather spotter US StormWatch showing a tornado-like column of fire. “Incredible fire behavior late last night on the #DixieFire making it’s own weather,” the Reno office posted on Twitter, adding that there was lighting and large fire whirls.

An ALERTWildfire web camera showed images of a pyrocumulonimbus cloud that stretched into the night sky Aug. 9 above the Dixie Fire.

National Weather Service meteorologist Shad Keene, based in Medford, Oregon, said that cloud is unusual for nighttime. “It’s indicative of how hot that fire is,” he said.

“As temperatures rise, the evaporative demand by the air increases, increasing the propensity of the atmosphere to act as a giant sponge and extract water from the landscape,” Swain said in an email. “Unless there is a big increase in precipitation to compensate for that effect — which there has not been — this dries out soils faster and to a greater extent than would otherwise be the case.”

That means both living and dead vegetation in the forest is drier by the peak of fire season, inviting the massive, explosive fires the area has been experiencing.

The conditions may also cause incident commanders to take a fresh look at strategies they’ve relied on.

Historically, firefighters would build lines ahead of the fire to help slow its progress, but that technique might not work as well this season, said Craig Clements, director of the Fire Weather Research Lab at San Jose State University.

In addition, Clements said the forests have been stressed from drought and bark beetle infestations for many years.

From 2010 to 2019, more than 163 million trees in California’s forests were killed, mostly by bark beetles, with the hardest-hit areas in the southern Sierra Nevada, according to the U.S. Forest Service.

“What we are seeing are these dense forests that are super dry because of climate change and drought and what you get is a lot of heat release” stirring up more intense fires, Clements said.

Swain said policies of “total fire suppression” in the 20th century eliminated “lower intensity natural fires from the landscape for so long that there was a buildup of unnaturally dense vegetation in many forests, which is now drying out and becoming substantially more flammable due to a warming climate.”

Wildfires could burn for months

There’s no relief in sight until rain falls in the fall.

“Typically, we don’t see any good rain until October or November,” said Emily Heller of the Sacramento weather office.

That means, experts say, a fire the size of the Dixie likely will not be completely extinguished for months.

Recent history shows the arrival of heavy rain could be at least as late as Heller suggested — if not later.

Redding received no rain last October and only 1.5 inches in November, according to the National Weather Service.

“The big picture is dry conditions return to above-normal temperatures for the long term and you already have an existing, significant drought. So, it’s challenging conditions for sure,” she said.

It “doesn’t predict fire itself but the likelihood if there is any fire, it is going to be a problem,” Heffernan said of the outlook.

Swain believes the Dixie Fire might not be snuffed out until the fall or winter, when the weather cools and the rain and snow falls.

If that’s true, he’s concerned that when the area’s ubiquitous fall winds start howling, they will whip up hot spots, carrying embers that could trigger more spot fires.

“I hope we don’t have any wind events that push it from east to west in September and October,” Swain said.

Rich Thompson, a meteorologist on the Dixie Fire, said the weather this week doesn’t look good: “We’re looking for a return of hot, dry conditions.”

Temperatures will range from the mid-90s to more than 100 degrees with humidity levels dropping from the low teens into the single digits. The wind pattern shifted Tuesday. Instead of the wind coming from the southwest, the wind was forecast to blow from the southeast at 4 to 8 mph with gusts between 12 to 15 mph.

The weather has already been working against firefighters.

Northern California’s multiyear drought set the stage for wildfires throughout the region, including in Siskiyou County where lightning started the 40-square-mile  Lava Fire in June and the 68-square-mile Antelope Fire in August.

“The vast majority of Siskiyou County is in extreme drought, which is the second driest category. The next one is exceptional drought,” said Keene, a National Weather Service meteorologist in Medford.

The West Coast and California in particular have experienced record high temperatures this year.

Thursday’s high temperatures were forecast to reach about 100 degrees in the Klamath River Valley and 105 in the Shasta Valley, about 10 to 20 degrees above normal. The best chance of relief from that heat might be tempered by wildfire smoke filling the sky.

Medford, whose records date back to 1911, has registered its hottest summer on record, and the Sacramento weather office recently said the Redding area has experienced the warmest average high temperatures for July on record.

“It’s just been very dry. We’ve had more days where fires, if they do start, they can become more rapidly out of control,” Heller of Sacramento said.

She noted the fire season started about 45 days earlier this year.

One positive, Keene said, is the nights are getting longer since we’re past the solstice, leaving a little less time for the region’s fires to burn during the day.

This story was first posted on: https://rssfeeds.usatoday.com/~/662131914/0/usatodaycomnation-topstories~Dry-hot-windy-Explosive-wildfires-in-Northern-California-could-burn-until-winter/