‘Fireballs’ will light up the sky tonight when the Perseid meteor shower peaks. Here’s how to watch. 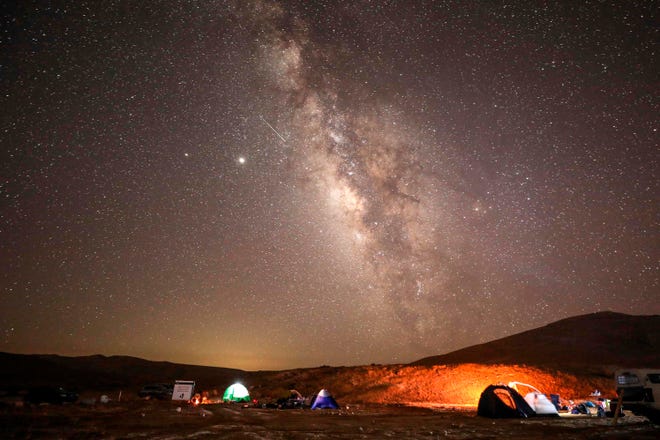 Gaze upon the night sky as the best meteor shower of the year makes its annual return.

It has been an incredible year to witness some of the solar system’s visually stunning phenomena, from the super flower blood moon in May, the ring of fire solar eclipse in early June and the strawberry supermoon late last month. Now, it’s time for the annual meteor shower NASA has called the best of the year.

The Perseid shower began July 14 and will continue through Aug. 24, with the peak coming in mid-August. This year, that peak will be Aug. 11-13.

Discovered in 1862 by Lewis Swift and Horace Tuttle, the shower originates from Earth entering the orbit of debris from the comet 109P/Swift-Tuttle, which takes 133 years to orbit the sun.

What makes the event so stunning is the shower’s bright, long streaks of light and dazzling “fireballs,” which are large bursts that last longer than typical meteors, according to NASA.

How to watch the Perseid shower

Luckily for people in the United States, the shower is more visible in the Northern Hemisphere. But, it does require staying up late, and a clear view of the sky.

The showers are best seen around 2 a.m. local time but can be visible as early as 9 p.m. It can be seen until just before dawn.

If staying up late every night for the chance to see the shower isn’t ideal, it may be best to wait for the peak. From Aug. 11 to 13, up to 100 meteors an hour can be seen in the night sky.

Last year, the moon’s light made it harder for people to catch a glimpse of the showers. This year will be better, because the moon is in its the waxing crescent phase and will be in it again during the peak period, meaning it won’t have much light to compete with the meteors.

This story was first posted on: https://rssfeeds.usatoday.com/~/657780974/0/usatodaycomnation-topstories~Fireballs-will-light-up-the-sky-tonight-when-the-Perseid-meteor-shower-peaks-Heres-how-to-watch/