3 men sentenced in 2019 assault on gay couple in Austin, Texas 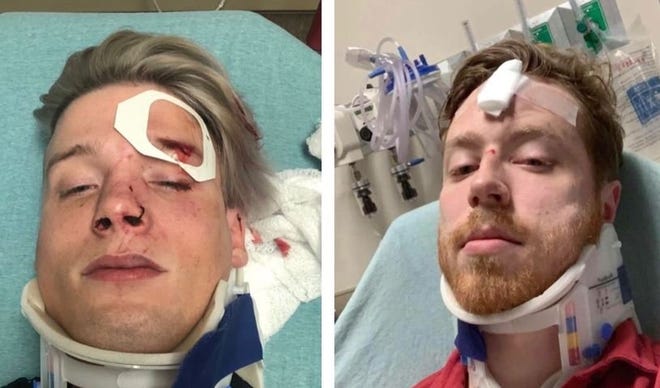 AUSTIN, Texas — Three of the four men accused in a 2019 assault on a gay couple in downtown Austin won’t serve any additional jail time after reaching plea deals.

The three men each pleaded to two counts of misdemeanor assault with a hate crime finding, even though the Austin police detective who investigated the fight reported about a year into the investigation that he did not believe the assault was a hate crime. The attorney representing the man whose charge was dismissed said the case was “motivated by misinformation.”

The assault against Spencer Deehring and Tristan Perry inspired a nighttime rally at the Capitol and the creation of a citizen foot patrol, but it also drew new attention to the prosecution of hate crimes in Austin.

“We will not stop until the hate crime laws in Texas are enhanced to allow thorough prosecution of those committing such heinous crimes,” Perry and Deehring said in a statement. “Our community has to live in constant fear of narrow-minded violent individuals that are threatened by our very existence. No person should be subjected to violence because of who they love or what they look like. Love will always conquer hate.”

Quinn O’Connor, Frank Macias and Kolby Monell will not serve any additional jail time as part of the plea deal. O’Connor and Monell will serve two years of probation, 50 hours of community service each, anger management counseling, and they must stay away from downtown for two years.

Macias agreed to one year of jail time, but was already credited for the time he served in Travis County and is now in the Denton County Jail on a different charge.

The case against the fourth man was dismissed.

Perry told police he was punched to the ground, where he was beaten with fists and feet. According to the affidavit, Deehring intervened and also was knocked to the ground and beaten.

Medics took the couple to the hospital, where they were treated for numerous injuries, including concussions.

“The district attorney’s office takes these cases very seriously,” Assistant District Attorney Beth Payan said in a statement. “… It was very important to us that we secure the hate crime finding so that justice could finally be served. Hate crimes will not be tolerated here in Travis County, and they will be prosecuted accordingly.”

Texas law regarding hate crimes states that investigators “have to prove that the defendants selected the victims because of their bias,” said Rhett Braniff, Macias’attorney.

“What most of us felt, in this case, was that if a jury looked at the evidence here, they may not have come to that conclusion. In other words, this was a fight between two groups of people, and it may have happened regardless of the sexual orientation of either of them.”

The four men were initially charged with aggravated assault with a deadly weapon, a first-degree felony. The hate crime designation would have allowed the crime’s maximum penalty to be life in prison.

Defense attorney Leslie Boykin, who represented O’Connor, declined to speculate on whether it was a hate crime.

The hate crime finding “was very important to the victims, so I don’t believe that we would have been able to get to a misdemeanor had they not agreed to that,” Boykin said.

Rick Flores, Monell’s attorney, said he appreciated the DA’s office giving his client the opportunity to plead to a misdemeanor.

“I only wish they had gone further and recognized this for what it was — a downtown fight rather than a hate crime,” Flores said.

This story was first posted on: https://rssfeeds.usatoday.com/~/662024924/0/usatodaycomnation-topstories~men-sentenced-in-assault-on-gay-couple-in-Austin-Texas/