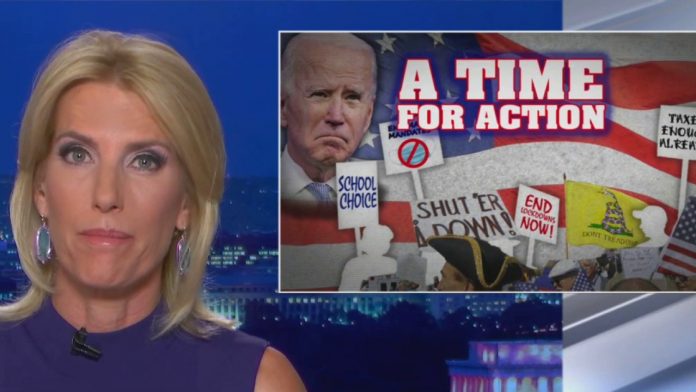 Ingraham sounded off on federal lockdowns as a scheme to stoke public fear that would preface a complacent public. “I think it’s safe to say that many were never happier than when Americans were forced by their government order, out of the workforce, out of school, away from church, and away from friends and family,” she said.

“In case you didn’t notice, Democrats love shutdowns and COVID[4] mandates as much as they love high taxes and climate regulations.”

Ingraham described what she considers “sparks of activism” from conservatives on issues such as critical race theory and masks in schools, saying, “A Tea Party 2.0 movement could appeal to frustrated African Americans who don’t want to be demonized for their personal medical decisions. Hispanic business owners who didn’t work hard for their American dream only to have the lockdowns turn it into a nightmare. And to suburban women who don’t want their kids indoctrinated at school.

The “Angle” host also said a new movement could intrigue “urban professionals who are sick of paying high taxes to live in high crime neighborhoods and to evangelical voters who don’t want to be told that their faith is not ‘essential’ by Washington bureaucrats or godless governors.”

“The Biden White House[5] is counting on the public to stay panicked, being scared, and having zero independent thought,” she said.

“It’s time for an American call-to-action. I don’t care what you call it,” said Ingraham, “but the principles are all found in our Constitution.”

This story was first posted on: https://www.foxnews.com/media/laura-ingraham-new-tea-party-movement