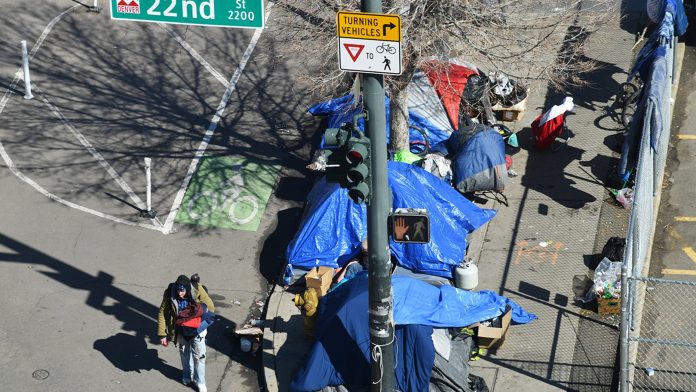 The city of Denver[1] spends at least twice as much on homelessness[2] per person as it does on K-12 public school students[3] – and the spending crushes the veterans affairs budget in the state, a new study released Thursday found, according to a report.

For comparison, the city reportedly spends between $41,679 and $104,201 on each person experiencing homelessness in a year while only $19,202 on each K-12 public school student over the same period of time.

The amount spent on each homeless person in the area is comparable to the average income of area residents. The average rent for a person living in the area is $21,156 per year and the median per capita income is $45,000, FOX 31[4] of Denver reported.

The Denver metro area spends $481 million on health care, housing and other services for the homeless, according to a report from FOX 31.

That amount is also nearly four times more than the budget for the Colorado Department of Military and Veterans Affairs and significantly more than the public safety, labor or employment departments, the station reported.

The study was conducted by the University of Colorado Denver and the advocacy group Common Sense Institute.

The amount includes spending by the city, Denver Health and charities, according to the Denver Post.

A homeless camping site is seen near the corner of 22nd and Stout streets in Denver, March 5, 2021. (Getty Images)

Brenda Dickhoner, a co-author of the report, said she believes it may have undercounted the spending on homelessness because charitable money is difficult to track. She added that it focuses only on direct spending and not related funding from police, fire or parks, according to the Post.

On Wednesday, the city released its five-year plan for combatting homelessness. A city spokesperson told the Post [6]the city doesn’t track per-capita spending.

“The aim of all these steps and our entire strategy is to help as many of our unhoused residents as possible to enter housing — and to stay housed,” Mayor Michael Hancock wrote in a letter Wednesday with the release of the five-year plan. He also defended the city’s increased homeless encampment sweeps. “When homelessness occurs, we should do everything in our power — as a society, not just as a government — to make it brief and one-time.”

Denver is one of many cities struggling with rising numbers of homeless people, a problem that has been magnified by the coronavirus pandemic.

This story was first posted on: https://www.foxnews.com/us/denver-spends-homelessness-students-veterans-affairs