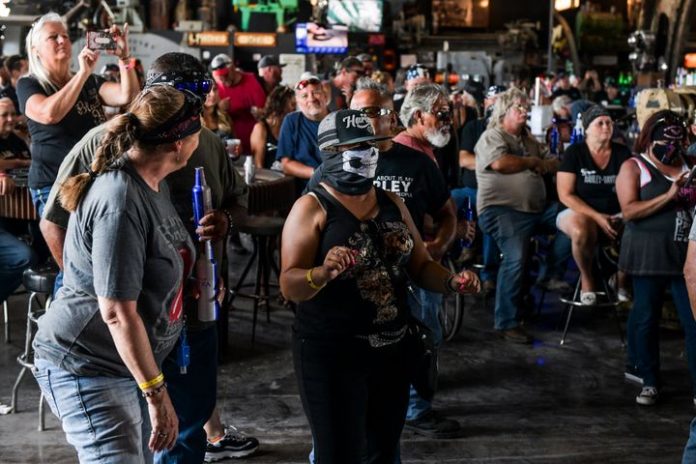 SIOUX FALLS, S.D. (AP) — Crowds of bikers are rumbling their way towards South Dakota’s Black Hills this week, raising fears that COVID-19 infections will be unleashed among the 700,000 people expected to show up at the Sturgis Motorcycle Rally.

The rally, which starts Friday, has become a haven for those eager to escape coronavirus precautions. Last year, the rally hardly slowed down, with roughly 460,000 people attending. Masks were mostly ditched as bikers crowded into bars, tattoo parlors and rock shows, offering a lesson in how massive gatherings could spread waves of the virus across the country.

This year — the 81st iteration of the rally — is expected to be even bigger, drawing people from around the U.S. and beyond, despite concerns about the virus’ highly contagious delta variant.

“It’s great to see a party of hundreds of thousands of people,” said Zoltán Vári, a rallygoer who was settling into his campsite Tuesday after making the trek from Hungary.

He was eager to return to riding a Harley-Davidson through the Black Hills after missing last year. Vári evaded U.S. tourism travel restrictions on Europe by spending two weeks in Costa Rica before making his way to South Dakota. He hopes 1 million people will show up. Typical attendance is around a half a million.

The city of Sturgis, usually a sleepy community of under 7,000, tried to tamp things down last year, canceling most city-sponsored events and promotion, but hordes of bikers showed up anyway.

“The rally is a behemoth, and you cannot stop it,” said Carol Fellner, a local who worried that this year’s event would cause a fresh outbreak of cases. “I feel absolutely powerless.”

This year, the city is embracing the crowds. Republican Gov. Kristi Noem has given the rally her blessing and will appear in a charity ride. The event is a boon for tourism, powering over $800 million in sales, according to the state Department of Tourism.

The rally is happening as other giant summer events — from state fairs to music festivals like Lollapalooza — are returning around the U.S. In Wisconsin, health officials say nearly 500 coronavirus cases may be linked to the crowds that attended Milwaukee Bucks games or gathered outside the team’s arena — estimated as high as 100,000 one night — during their push to the NBA championship.

The Sturgis Motorcycle Rally’s defenders argue open air is plentiful on the meandering highways and in the campgrounds where many bikers stay, but contact tracers last year reported 649 virus cases from every corner of the country linked to the rally, including one death. A team from the Centers for Disease Control and Prevention concluded in a published study that the 2020 rally “ had many characteristics of a superspreading event. ”

Rallygoers reasoned that after years of riding Harleys, the coronavirus was just another risk. Five motorcycle riders were killed in crashes during the 2020 rally, and one fatal crash has already been reported this year.

The attitude was summed up on a T-shirt sold last year: “Screw COVID. I went to Sturgis.”

But public health experts warned the massive gathering revved the virus far beyond those who chose to attend. One team of economists argued that the rally set off a chain reaction that resulted in 250,000 cases nationwide. However, that paper was not peer reviewed and was criticized by some top epidemiologists — as well as some bikers — for overestimating the rally’s impact.

While it’s not clear how many cases can be blamed on last year’s rally, it coincided with the start of a sharp increase across the Great Plains that ultimately crescendoed in a deadly winter.

The gathering could potentially power a fresh wave of infections like the one that is currently shattering hospitalization records in parts of the South, said Dr. Michael Osterholm, the director of the University of Minnesota’s Center for Infectious Disease Research and Policy.

“I understand how people want to move on from this pandemic — God knows I want to — but the reality is you can’t ignore it,” he said. “You can’t just tell the virus you’re done with it.”

The current rate of cases in South Dakota is roughly half of what it was in the days leading up to last year’s rally. Deaths have also dropped significantly.

COVID-19 vaccines provide hope the rally won’t set off virus spread, but it’s not clear how many in the Sturgis crowd have received a shot. Unlike events like Lollapalooza that required attendees to show proof of vaccination or a negative COVID-19 test, precautions at Sturgis are minimal and optional. The biggest step the city has taken was to allow rallygoers to drink on public property, reasoning it will spread the bacchanalia into the open air.

Only about 46% of adults in the county that hosts Sturgis are fully vaccinated, according to the CDC, compared with 60.6% nationwide. Vaccination rates were similarly low in the five counties where most 2020 rallygoers hailed from, according to an analysis of cellphone data from the Center for New Data. Only one — Maricopa County, Arizona — has cracked 50%. Campbell County in Wyoming, has the lowest rate, at just 27%.

Vári, the biker from Hungary, said he’s been fully vaccinated — but only because he falsely thought he needed proof of vaccination to get into the U.S.

This story was first posted on: https://www.huffpost.com/entry/sturgis-motorcycle-rally-covid-concerns_n_610b5c3ee4b075592c775fb9