Poland grants visa to sprinter who refused to board flight home 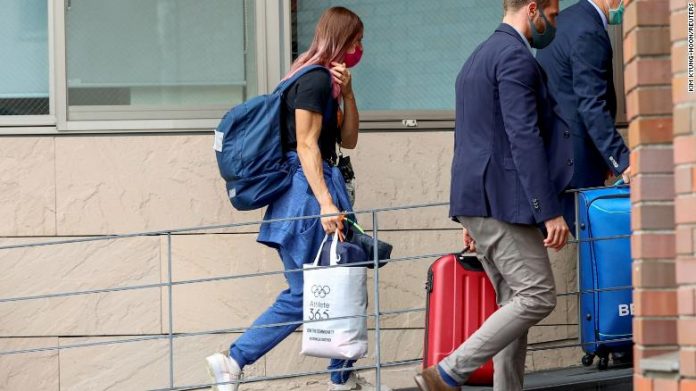 Poland’s Deputy Minister for Foreign Affairs, Marcin Przydacz, announced on Twitter that Timanovskaya had been granted the visa. “Poland will do whatever is necessary to help her to continue her sporting career. (Poland) always stands for solidarity,” he posted.
He later told Reuters that the 24-year-old Olympic athlete was planning on traveling to Poland in the following days. “According to her decision, that’s what our consul heard in Tokyo, she’s planning to come to Poland in days to come to be here in Warsaw. And if she would like… she is free to pursue her sporting career in Poland,” Przydacz said.
Earlier Monday, Reuters reported that Timanovskaya had been seen entering the Polish embassy.
Timanovskaya was set to compete in the women’s 200 meters at the Tokyo Olympics on Monday but said representatives of the Belarus national team tried to forcibly send her back to her home country after she criticized national sporting authorities for entering her into the 4×400 meter relay without her consent.
Team officials came to the Olympic Village on Sunday afternoon and asked her to “pack her belongings as a decision had been made for her to return to Minsk,” said Anatol Kotau, of the Belarus Sports Solidarity Foundation, which represents athletes repressed by Belarusian authorities, and who is in direct contact with Timanovskaya.
The Belarus Embassy in Tokyo said in a statement on Monday that Belarusian diplomats arrived at the airport on Sunday to “clarify the circumstances” and provide “possible consular and legal assistance if necessary,” but were unable to obtain any information about Timanovskaya from Japanese representatives. The statement added that the athlete has not been in contact with the embassy.
On Tuesday, the International Olympic Committee said it will launch a formal investigation into Timanovskaya’s situation.
“We have decided to launch, not surprisingly, a formal investigation which will be led by the IOC Administration. We need to establish the full facts, we need to hear everyone involved, that obviously can take time,” IOC spokesman Mark Adams said in a press briefing.
Non-profit organization Global Athlete called on the IOC to immediately suspend the Belarus National Olympic Committee and allow all Belarusian athletes to compete as neutral athletes under the Olympic flag.
Timanovskaya was scheduled to leave on a 10:50 p.m. flight to Istanbul on Sunday but upon arriving at the airport, Timanovskaya approached a Japanese police officer and asked to apply for political asylum, Kotau said
“I am afraid that I might be jailed in Belarus,” Timanovskaya said in an interview with the Belarusian sports news site Tribuna on Sunday. “I am not afraid of being fired or kicked out of the national team. I’m concerned about my safety. And I think that at the moment it is not safe for me in Belarus. I didn’t do anything, but they deprived me of the right to participate in the 200 meter race and wanted to send me home.”
Timanovskaya’s husband, Arseni Zdanevich, has left Belarus and entered Ukraine, Ukranian Interior Ministry spokesman Artem Shevchenko told CNN on Monday.

Late Sunday, the Olympic athlete was moved from Tokyo’s Haneda Airport and “secured by police in a special shelter.” The IOC said earlier on Monday that Timanovskaya had spent the night at an airport hotel and was in the hands of Japanese authorities.
IOC spokesman Mark Adams said in a daily press briefing the IOC has asked the Belarus National Olympic Committee for a full written report on the situation.
“We’re talking again to her this morning to understand what the next steps could be and what she wants to pursue, and we will give her support in that decision,” Adams said, adding that the United Nations refugee agency (UNHCR) is involved in her case.
Later on Monday, the US Ambassador to Belarus thanked Japanese and Polish authorities for coming to Timanovskaya’s aid.
“Thanks to the quick action of Japanese and Polish authorities, Tsimanouskaya is able to evade the attempts of the Lukashenka regime to discredit and humiliate this #Tokyo2020 athlete for expressing her views,” Julie Fisher wrote on Twitter. [1]
Throughout the Cold War, numerous athletes defected from the Soviet Union and communist eastern bloc countries during major overseas sporting competitions. Though such acts have become rarer since the fall of the Soviet Union, defections from other nations continue to occur.
Last month, 20-year-old Ugandan weightlifter Julius Ssekitoleko went missing[2] after leaving a note saying his life in Uganda was too difficult and he wanted to work in Japan. He was found and transferred to police custody. Multiple African Olympians reportedly went missing during the 2012 London Games — with Eritrea’s flag-carrying runner Weynay Ghebresilasie among those applying for asylum in the United Kingdom.
Unlike these athletes, however, Timanovskaya did not appear to set out with the intention of defecting for political reasons, and instead appears to have been forced into the act after speaking out against an official decision to include her in a race she has not run before.

Timanovskaya did not say exactly what she feared she would be jailed over, but Belarusian athletes have faced retaliation, been detained, and excluded from national teams for criticizing the government following mass protests[3] last year against longstanding strongman Alexander Lukashenko.
Thousands of people were arrested in the protests, which were brutally suppressed[4] by authorities amid widespread reports of abuse and torture[5].
The Belarusian leader has ruled the country for 27 years and was in charge of the country’s National Olympic Committee (NOC) for decades before his eldest son, Viktor, took over in February.
However, the IOC refused to recognize Lukashenko’s son, saying in a statement[6] the Belarus NOC had “not appropriately protected the Belarusian athletes from political discrimination.” In December, the IOC banned both Lukashenko and his son from attending the Tokyo Games.
On Monday, Belarusian opposition leader Svetlana Tikhanovskaya[7] called on the the international community to ensure Timanovskaya’s safety and for an investigation into the incident. She referenced the detention of a dissident journalist who was arrested after his Ryanair flight from Greece to Lithuania was diverted[8] and forced to land in Belarus in May.
“The regime is continuously testing boundaries. Its terror is not limited to Belarus borders anymore. First, it hijacked the airplane flying from one EU capital to another one. Now, it is kidnapping its citizens in other sovereign state’s territory during a significant sports event. It is the result of the impunity of the regime,” Tikhanovskaya told CNN on Monday.
“No doubt, Kristina Timanovskaya is our hero; she found the courage to speak out and faced repressions for her bravery. We should express solidarity and stand with her. We will be asking for international protection for her, as well as an investigation of the incident. All perpetrators must be punished and eliminated from [participating] in any international events. Unfortunately, this case is also a sign that not a single Belarusian who has left the borders of Belarus is safe.”
“On the other hand, this is also a sign that the regime is fragile, insecure,” Tikhanovskaya added. “I hope it is also a sign of the upcoming and inevitable collapse of the regime.”

Timanovskaya told Belarusian sports outlet Tribuna that she had never competed in the 400 meters and was “outraged” by the decision to include her in the relay event.
“I would never in my life begin to react so harshly if they would come up to me in advance, explain the situation and find out if I can run 400 meters and I am ready? But they decided to do everything behind my back despite the fact that I tried to find out this information but was only ignored,” she wrote in an Instagram post on Friday.
While her comments don’t appear to be political, her apparent criticism of an official decision hit a nerve in a country where dissent is increasingly being punished[9], especially since elections last year.
After recording a video on Instagram venting her frustrations, she said that “(team officials) started calling me with threats and demanding to delete the video if I want to go ahead in sports. At first, I refused to delete it for a long time, but then I did it, so that they stop calling me.”
The Belarus NOC said Sunday that Timanovskaya was withdrawn from the Games due to her “emotional and psychological state,” a claim the athlete disputes.
“According to the doctors’ conclusion, due to the emotional and psychological state of the Belarusian track and field athlete Kristina Timanovskaya, the coaching staff of the national track and field team decided to stop the athlete’s performance at the Games of the XXXII Olympics,” the committee said in a statement on their Facebook page.
“Therefore, the athlete’s application for participation in the qualifying races for the 200 meter and in the 4×400 meter relay has been withdrawn,” it added.
Timanovskaya said a psychologist came to speak with her in a way she described as “nonsense.”
“No doctors came up to me. No one examined me,” she said. “I have a good psychological state, even despite the fact that such a situation was going on. I am holding up normally, I have no health problems, no traumas, no mental issues. I was ready to run.”
Timanovskaya said Yuri Moisevich, the head coach of the national athletics team, told her that “this issue is no longer at the level of the federation (of athletics), neither at the level of the Ministry of Sports, but at a higher level.”
“That I should be eliminated from the Olympics, returned home, because I am in the way of the team performing,” she said.
CNN has reached out to Timanovksaya and the Belarusian National Olympic Team for more information, but has not received a response.

This story was first posted on: https://edition.cnn.com/2021/08/02/sport/belarus-kristina-timanovskaya-olympics-asylum-intl-hnk/index.html