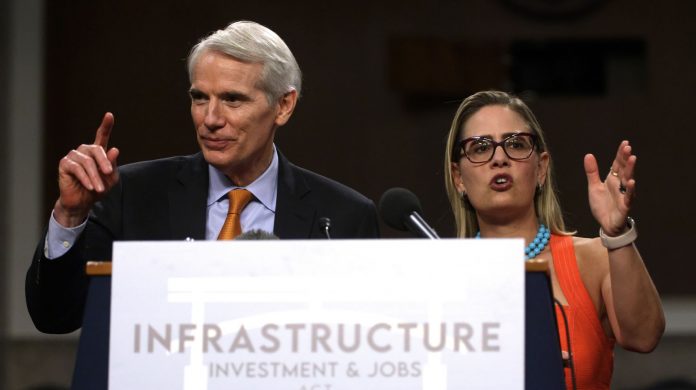 People under the age of 21 could get a chance to work as long-haul truck drivers[1] thanks to a bipartisan infrastructure bill that could soon pass the U.S. Senate[2].

After weeks of negotiations, senators over the weekend finally released the legislative text of their bill, which would allocate more than $500 billion to fix up roads and bridges, improve passenger rail and expand broadband internet access.

The bill would also establish an apprenticeship program that would let 18- to 21-year-olds cross state lines in 18-wheelers ― a small win for the freight industry on top of the bill’s $100 billion investment in roadways.

“Americans, and the hardworking men and women who carry this economy on trucks, have waited long enough for Washington to act on our decaying infrastructure,” Chris Spear, president of the American Trucking Associations, said last week as lawmakers finalized their deal.

Federal law requires commercial truckers to be at least 21 years old for interstate commerce, but the trucking industry has long complained of a labor shortage, saying there aren’t enough drivers willing to work for prevailing pay rates. The ATA has lobbied for years to expand its labor pool by lowering the age limit through an apprenticeship program similar to the one in the bill. [3][4]

According to the legislation, apprentices would have to be at least 18 and must already have commercial driver’s licenses. They would undergo weeks of additional training, and would only be allowed to drive trucks with active braking collision mitigation systems and forward-facing video cameras. The apprenticeship program would enroll 3,000 drivers under the age of 21 at a time, and the Department of Transportation would evaluate their safety records compared to those of non-truck drivers in a report to Congress in three years.

Safety could be a concern. When it comes to regular cars, drivers aged 16 to 19 are nearly three times likelier to be involved in fatal crashes than drivers 20 and older, according to the nonprofit Insurance Institute for Highway Safety, though the risk is greatest for drivers aged 16 and 17. Large trucks were involved in only 12% of crashes in 2019.[5][6]

As for trucking’s labor woes, lawmakers at both the state and federal level have been increasingly sympathetic to hiring complaints from various industries, especially after enacting more generous unemployment benefits since last year. But a team of economists that examined available data on trucking employment and wages reported in 2019 that “the labor market for truck drivers works about as well as the labor markets for other blue-collar occupations.” That means freight companies could get more workers by offering higher pay.[7]

The overall bill will likely change as senators offer amendments, and it would also need to get through the House of Representatives. Rep. Peter DeFazio (D-Ore.), chair of the House Transportation and Infrastructure Committee, has called the Senate bill[8] “crap.”

This story was first posted on: https://www.huffpost.com/entry/trucking-apprenticeship-program_n_61084757e4b038cedb3699b4