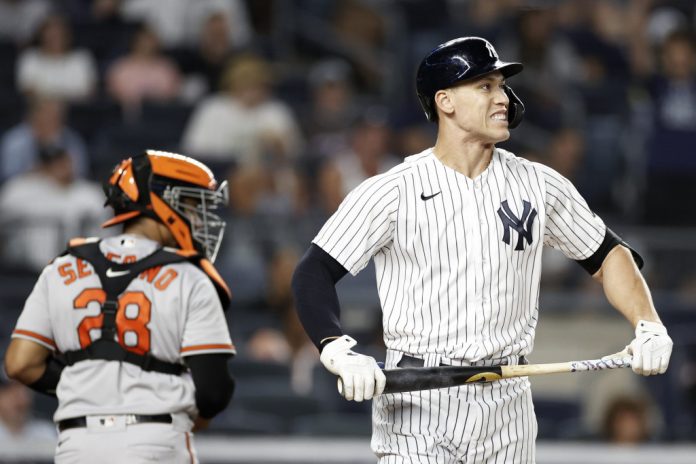 All the energy and all of the momentum the Yankees generated with their headline act leading to the trade deadline and their weekend sweep of the Marlins in Miami, well, they went pffft into The Bronx night Monday.

That was a pretty quick end to the Era of Good Baseball, no?

It’s not as if the marquee additions of Anthony Rizzo and Joey Gallo from the Cubs and Rangers, respectively, had no impact at all on this night at the Stadium. Oh, no. Because the simple truth is that without the lefties, the Yankees might have been shut out, if not no-hit by the Orioles.

Instead, the Yankees managed one run, courtesy of Rizzo’s foul sacrifice fly down the left-field line in the fifth inning and cobbled together two hits, the first a leadoff double by Gallo in the sixth after they’d been denied over the first five by Baltimore right-hander Jorge Lopez, who entered the game with a 6.19 ERA and had allowed 118 hits in 96 innings.

It was so much of the same-old, same-old for the new-look Yankees and their lineup, in which Gleyber Torres batted eighth for the first time in more than two years — since July 21, 2019. It was the air going out of the balloon, 7-1 the other way [1]to a Baltimore team that entered the game 30 games under .500 at 37-67. 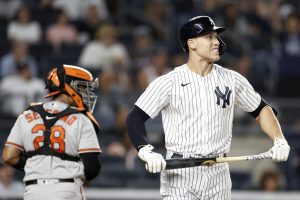 Oh, and with the news that Gerrit Cole has tested positive for COVID-19[2], this turned into a night to remember for all the wrong reasons. Folks can look it up on IMDB, but there once was a movie about the Titanic called “A Night to Remember.”

Every night is not going to be a referendum on these trades that will withstand scrutiny from here to the end of the line. But this one night provided a four-inning referendum on another deadline import, lefthander Andrew Heaney, who was acquired from the Angels on Friday and who served up four solo home runs within a six-batter stretch bridging the third and fourth innings before departing the mound to a hail of jeers.

“Usually I say solo homers don’t beat you,” said Heaney, who entered the game with an alarmingly high 31.1 percent flyball rate. “But when you give up four of them in four innings, that’s probably going to do it.”

This probably isn’t what the Yankees or general manager Brian Cashman had in mind when contemplating the addition of lefty power to the lineup. Oh boy, not at all.

The night began with hope and with Rizzo, No. 48, and Gallo, No. 13, profiles in pinstripes and fitting the historical pinstripe profile as lefty power hitters. There were some deep drives in batting practice. There were the cheers when the lineup was announced.

There was the Roll Call in which Gallo (“Joey Gallo…Joey Gallo”) acknowledged the bleacher creatures with a raised glove from left field and Rizzo (“Rizzo … Rizzo”) did the same from his first base spot.

“I think they’re excited to put on the pinstripes and play here at Yankee Stadium but unfortunately we were kind of held down and the Orioles took it to us tonight in every way,” manager Aaron Boone said following the defeat. “So you know, it spoils that homecoming a little bit.

“But we have an opportunity to come out and hopefully get after it [on Tuesday] and put this one behind us but it does spoil it a little bit when I know guys were really excited to make that debut and be here at Yankee Stadium.”

The Yankees’ championship pedigree has been supported by left-handed power taking advantage of the short porch in right field[3] through all of the Stadium’s incarnations. And even if this is neither your grandfather’s nor your father’s Yankee Stadium, with the porch 296-feet away and Death Valley in left center 457-feet from the plate, there is value in stacking lefties in pinstripes.

But lefty power was an afterthought in constructing this team. The Yankees entered the game with the second-fewest lefty at-bats in the majors, their total exceeding only Toronto’s, and the third-fewest homers from lefties.

Blasphemy in The Bronx.

But the additions of Rizzo and Gallo should, well, right that wrong. The lineup should have more pop. Boone should have more options even as the manager will have to make a lineup card without Gio Urshela, who was placed retroactively on the injured list. The Yankees, who had won five of six, 10 of 14 and 15 of 22 before this debacle, should be more formidable leaning left.

The splash at the deadline was emblematic of the Yankees Way. Big names were available and Cashman went out and got them.

They were the Yankees on Monday, all right, but they did the things the 2021 Yankees had been doing before the deadline.